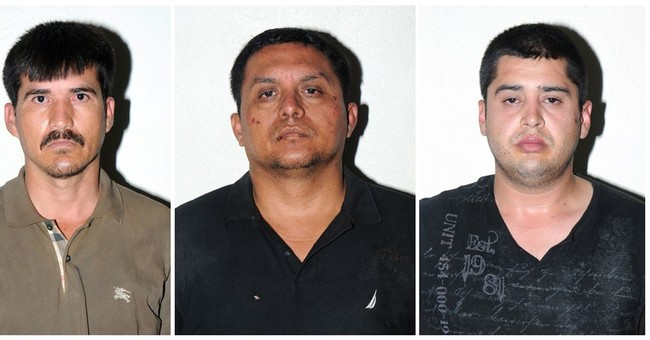 Monday, the leader of the brutal Mexican Zeta Cartel Miguel Angel Trevino Morales was arrested and taken into custody. Morales was best known for punishing his enemies by boiling them alive in oil. He was captured in Nuevo Laredo, a border city right across from Laredo, Texas.

Trevino Morales, known as “Z-40,” was captured by Mexican Marines in Nuevo Laredo, the Mexican media reported. The U.S. official who confirmed the media reports was not authorized to speak to the press and asked not to be identified.

Trevino’s capture removes the leader of a corps of special forces defectors who splintered off into their own cartel and spread across Mexico, expanding from drug dealing into extortion and human trafficking.

Along the way, the Zetas authored some of the worst atrocities of Mexico’s drug war, slaughtering dozens, leaving their bodies on display and gaining a reputation as perhaps the most terrifying of the country’s numerous ruthless cartels.

Why does this matter? Despite what the Obama administration and Congress continually says about the border being "more secure than ever," cartel violence is spilling over our borders and running rampant in states across America.

Take for example what happened last week when an innocent Texas man, with no relation to the drug trade, was kidnapped by Gulf cartel members, taken to back to Mexico thanks to a porous border and executed.

The partial unsealing of a criminal complaint by the U.S. Attorney’s Office reveals a Mexican man legally living in the U.S. was kidnapped on U.S. soil by the Mexican Gulf cartel, illegally brought across the U.S. southern border back into Mexico, and allegedly executed.

Roel Garza of Texas was arrested on July 7, 2013 and stands accused of participation in the kidnapping which authorities say was retaliation by the Mexican Gulf cartel for the theft of more than 100 kilograms of cocaine from the cartel. The victim, however, was not involved in any way with the stolen drugs.

“The victim was a permanent resident of the U.S. with no criminal record and had no involvement in the theft or sale of cocaine. The victim has not been heard from or seen since this event,” explained the U.S. Attorney’s Office.

Just a few months ago, the Associated Press released an alarming report about cartels operating on American streets, within American gangs and in the American prison system.

"We know that hundreds of cities across America have been infected by Mexican cartels" Cutler said.

For months President of the Immigration and Customs Enforcement Union Chris Crane has been begging Congress to address the issue of interior enforcement to deal with the dangerous cartel problem. His requests have been repeatedly ignored by lawmakers working on immigration legislation.

"We aren't even scratching the surface on the criminal illegal alien problem in the United States," Crane said. "That part [cartels] is absent from this discussion as are many parts of this....we know that the drug cartels, that the lieutenants and the troops, the soldiers, they're all within the interior of United States and they're all conducting business as are many other criminal elements and criminal individuals. There are people coming here for this to be a land of opportunity and there are people coming here because the United States for them is a target of opportunity and we believe there is a very disproportionate number of criminals coming into the United States. That conversation is almost completely absent from this entire public conversation about what's happening....It's just another part of this debate that gives us this concern that this is all about politics and not about really fixing the problems that we face within our broken immigration system and providing for what is best for everyone is best for America to include and most importantly, public safety."

A recent Rasmussen Report shows the majority of Americans are more concerned about cartel violence than they are about illegal immigration. The majority also want the military to patrol and do exercises on the border, something hardly being discussed seriously on Capitol Hill.

Voters remain more concerned about Mexican drug violence coming to this country than they are about illegal immigration, and most favor use of the U.S. military on the border to prevent it.

Sixty-nine percent (69%) believe the U.S. military should be used along the border to protect American citizens if the drug violence continues to escalate along the Mexican border. Only 16% disagree, but another 15% are not sure.

Seventy-three percent (73%) of U.S. voters think it is at least somewhat likely that this drug violence will spill over into the United States. Twenty percent (20%) feel that’s unlikely. This includes 36% who think the violence is Very Likely to come here and just two percent (2%) who say it’s Not At All Likely.

As the House starts work on an immigration overhaul tied to border security, representatives should keep in mind that they owe the American people action in order to protect their safety. Cartel violence is a serious issue that must be addressed, not ignored.