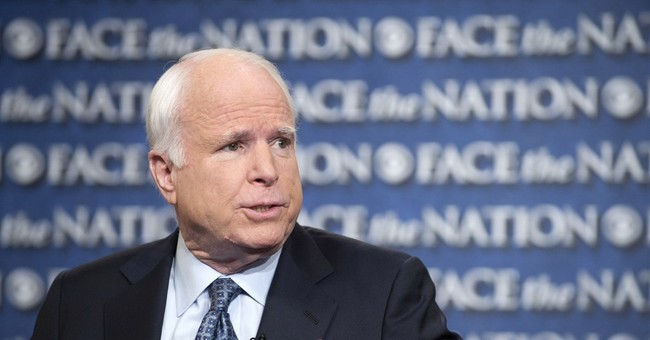 Over the weekend, NSA whistleblower Edward Snowden publicly revealed his identity and told the world he was the guy who exposed vast snooping on U.S. citizens by the U.S. government. Naturally, the White House and Congress have been asked to respond to NSA actions. Both Democrats and Republicans are defending the secret monitoring of hundreds of millions of American phone calls each day.

Arizona Senator and former GOP Presidential candidate John McCain said Sunday the threat of terrorism in the United States “is getting worse,” and this validates the government’s controversial monitoring of all telephone calls and emails placed in the country.

Appearing on CNN’s “State of the Union” McCain responded to host Candy Crowley asking if McCain had a problem with the Foreign Intelligence Surveillance Act (FISA) program, he answered, “No, not really.”

“I think we have to understand this issue in the context of what also has been going on,” McCain said. “I believe that the FISA Court system is an appropriate way of reviewing some of these policies. If this was Sept. 12, 2001, we might not be having the argument that we are having today.”

McCain continued to dismiss any concerns over privacy, saying it’s a “balancing act” and then targeted his fellows Senators.

Sens. Dianne Feinstein and Saxby Chambliss also defended the National Security Agency’s request to Verizon for all the metadata about phone calls made within the U.S. and from the U.S. to other countries. They said the information gathered by intelligence on the phone communications is “meta data” used to connect phone lines to terrorists and that it did not contain the content of the phone calls or messages.

President Obama last week, "Nobody is listening to your phone calls."

President Barack Obama issued a strong statement in support Friday for the controversial National Security Agency surveillance programs that have been disclosed to the press in recent days.

“You can shout Big Brother or program run amok, but if you actually look at the details, I think we’ve struck the right balance,” Obama said in his first remarks on the subject since the issue arose this week.

”Nobody is listening to your telephone calls,” Obama said repeatedly. “That’s not what this program is about.


But the good news is, at least one Senator isn't very happy about this whole thing.

Sen. Rand Paul (R-Ky.) said Sunday that he is weighing a Supreme Court challenge to the National Security Agency's controversial surveillance programs, calling the organization's collection of records an "extraordinary invasion of privacy."

"I'm going to be seeing if I can challenge this at the Supreme Court level," Paul said on Fox News Sunday. "I’m going to be asking all the internet providers and all of the phone companies: Ask your customers to join me in a class action lawsuit. If we get 10 million Americans saying we don’t want our phone records looked at, then maybe someone will wake up and something will change in Washington."

"The irony is that people voted for President Obama hoping for something different," Paul said in a statement. "That's why a lot of people I think are disappointed in the president. They're disappointed in him targeting reporters. There's just a lot to be disappointed about."