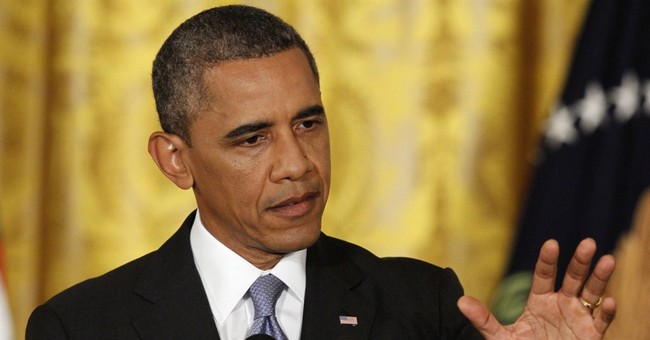 An ‘Employer-Mandate Delay’ here and a ‘Cap-on-Costs Delay’ there are apparently only the tip of the iceberg when it comes to the Obama Administration’s inability to effectively implement deadlines for Obamacare. According to a Forbes’ exclusive, an unpublished Congressional Research Service report reveals that Obama Administration has failed to meet half of the deadlines legally required by the Affordable Care Act.

Forbes’ graph illustrates the 41 out of 82 deadlines the Administration has failed to meet as of May 31st, 2013:

The CRS report omitted any missed deadline that was not a direct result of “the administration’s competence” (such as individual state’s implementation of Medicaid expansion). Even if we exclude the 9 missed deadlines which resulted from “lack of congressional appropriation,” the Obama Administration alone is still responsible for 41 out of 73 missed deadlines- that’s a jump to 56%.

The CRS report only included a list of missed deadlines up until May 31, 2013. That means recent deadline failures, such as the delay on out-of-pocket insurance costs, haven’t been factored into the statistics yet. What’s worse is that Forbes’ contributor, Avik Roy, was generous to the Obama Administration in his analysis of the report, through which he concluded that it has failed to meet between 50-56 percent of its own bill’s deadlines.

In analyzing the CRS report, I erred on the side of generosity. If the administration missed a particular statutory deadline by a week or less, I counted it in their favor as a “met” deadline. In any case where there was ambiguity in the CRS report, I assumed that the administration had met the deadline. So these 50-56 percent missed deadline figures should be seen as slightly conservative.

Forbes’ examples of missed deadlines highlight bureaucratic laziness as well as catastrophic incompetence that may put the American people at risk for fraud and/or exposure. The one common factor between them, however, is that every missed deadline further illustrates the Obama Administration’s inability to carry out the simplest tasks, let alone run an efficient and effective national health care service:

“(The) document reads like a kind of caricature of bureaucratic busywork. For example, Section 10407(d) mandates that by March 23, 2012, the Secretary of Health and Human Services is required to “submit to Congress a report on the appropriate level of diabetes medical education.” To date, the report has not been located. Also on that date, the Secretary is required to “implement a 5-year national public education campaign on oral health care prevention and education.” She missed that one too.

But there are some more economically significant deadlines that the administration has missed. A requirement for the Secretary to “develop requirements for health plans to report on their efforts to improve health outcomes,” also due on March 23, 2012, has not been met to date. A number of rules that would safeguard the privacy of medical records have either yet to be developed, or have been meaningfully tardy in their arrival.

Let’s reiterate once again that it is illegal and unconstitutional for the president to pick and choose which parts of federal law he will implement and which parts he will delay or ignore. Any change to federal law, including deadlines of implementation, must be approved by both the House and the Senate before the change takes place.

This should not be a hard concept to understand, especially for a president who worked as a constitutional law lecturer. The real concept that is so difficult to grasp is how the Obama Administration has already spent $30.8 billion of taxpayer money on a program that isn’t even being implemented.

It makes you wonder what levels of incompetence we will be ‘benefitting’ from once we reach the projected $2.6 trillion worth of federal spending on Obamacare over the next decade…