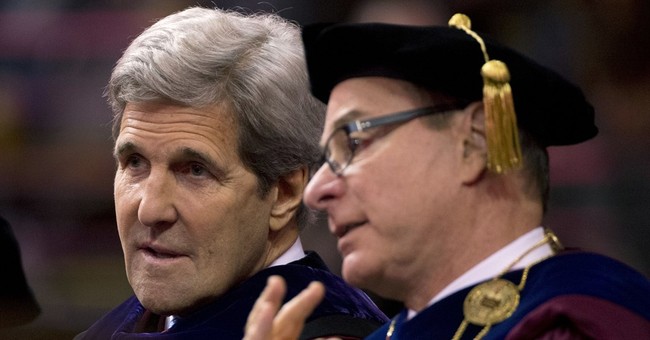 John Kerry criticized Republican nominee Donald Trump's foreign policy agenda during a commencement speech at Northeastern University on Friday by saying that international barriers are "nostalgia for some rose-tinted version of the past."

"Many of you were in elementary school when you learned the toughest lesson of all on 9/11," he said. "So I think that everything that we've lived and learn tells us that we will never come out on top if we accept advice from sound-bite salesmen and carnival barkers who pretend the most powerful country on Earth can remain great by looking inward.  And hiding behind walls at a time that technology has made that impossible to do and unwise to even attempt."

"The future demands from us something more than a nostalgia for some rose-tinted version of the past that did not really exist in any case," he added. "You're about to graduate into a complex and borderless world."

During a press conference last month, Trump said, “We will no longer surrender this country, or its people, to the false song of globalism."

“Under a Trump Administration, no American citizen will ever again feel that their needs come second to the citizens of foreign countries.”