US Military Told to "Run, Hide, and Then Fight if Necessary" 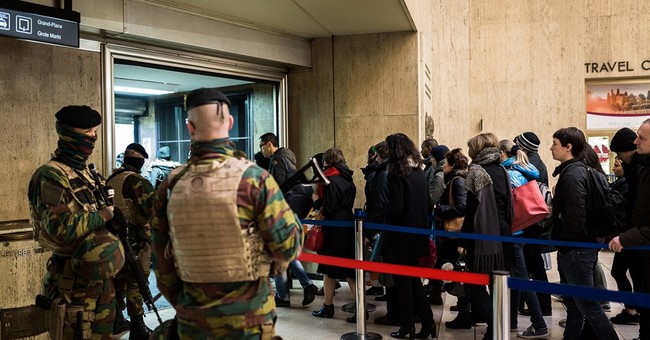 Just when you thought it could not get any worse, news breaks that top military officials have instructed military personnel to "run, hide and then fight if necessary."

"The recent attacks that we have seen in Brussels and Turkey really highlight that we are facing a significant and persistent threat throughout the theater," said Robert Balcerzak, deputy chief for anti-terrorism for U.S. Army Europe.

The response of troops caught up in a terror attack "really depends on the situation," Balcerzak said in a statement. "In the event of an active shooter, the DoD stresses to run, hide and then fight if necessary. Perhaps most important -- if host nation or U.S. security is responding, be very cooperative with the law enforcement and careful you do not make yourself a suspect."

Defense Secretary Ashton Carter addressed the Corps of Cadets at the U.S. Military Academy at West Point Wednesday and said that the terror bombings in Brussels were "a grim reminder of how serious are the dangers we face - the dangers civilization and our country face."

One general even advised using an iPhone application to alert authorities if an individual notices suspicious behavior.

Lt. Gen. Ben Hodges, the USAREUR commander, said, "The reality of these attacks highlights the need for us all to be vigilant. I urge everyone to be aware of their local security situation, listen to AFN [Armed Forces Network] or local news outlets and ensure you are signed up for [the emergency communications system] AtHoc with your local garrison so that you may have the latest updates.

"If you see something that you think is suspicious, there are many different vehicles you can use to report," Hodges said. "iReport is a downloadable app that you can get on your smartphone which would make a quick way to report any suspicious activity, or you can go online to any one of the USAREUR webpages to iWatch -- it's the same mechanism."

The Defense Department and the State Department renewed and tightened travel restrictions and warnings on the ISIS threat throughout Europe and in Turkey for U.S. citizens and the more than 60,000 U.S. military personnel in Europe, with special emphasis on the upcoming Easter holiday weekend.

I only wonder what General George Patton would have to say about this gibberish.