No, Kyle Rittenhouse Being Found Not Guilty Did Not Cause the Buffalo Shooting 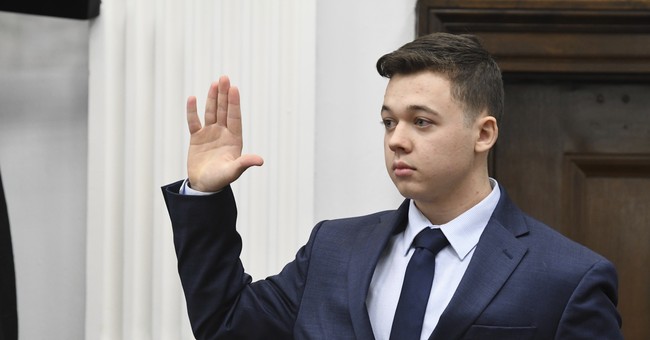 Liberals, progressives, and BLM activists are trying to explain the tragedy in Buffalo, New York, that occurred on Saturday by claiming it was allowed to happen, in part, because the jury in the Kyle Rittenhouse trial determined he shot in self-defense during the 2020 Kenosha riot.

Tweets comparing the Rittenhouse case and the Buffalo mass shooter, who shot and killed 10 people reportedly as an act of white supremacy, have gone viral on Twitter. In a manifesto, the Buffalo shooter expressed hatred for minorities and even Fox News.

Black people being gunned down is what happens when society lifts Rittenhouse up as a hero and treats Kaepernick as a villain.

This is what happens when we make Kyle Rittenhouse the hero and Colin Kaepernick the villain. pic.twitter.com/M1ZWPXaxEe

We are witnessing the Kyle Rittenhouse effect.

Not only comparing the two situations to each other is ahistorical, it is brain-dead moronic. As the trial laid out in painstaking detail, Rittenhouse, who has strong ties to Kenosha, went downtown on the night in question to protect a minority-owned business from further destruction. Remember, Kenosha was about to experience a third night of riots after a police officer was justified in using force against Jacob Blake.

The owners of Car Source already saw a total loss of one of their lots as every single car was set on fire. Rittenhouse and several others wanted to prevent even more damage from occurring, while not interfering with those who wanted to peacefully protest, though there were no peaceful protests in Kenosha after the sun went down. Rioters attacked the Kenosha County Courthouse, resulting in police and the National Guard pushing them out of the area.

When the rioters were pushed into the part of town where the armed civilians had positioned themselves, the rioters were not happy with the idea of not being able to attack defenseless buildings.

Rioters are now throwing projectiles at police and the National Guardsmen outside the Kenosha County Courthouse. pic.twitter.com/uYubsBGX0i

Rioters are getting into confrontations with armed citizens who are out here to prevent looting and destruction to businesses. pic.twitter.com/f65YkP24kG

When Rittenhouse went to put out a fire at another car lot, he was ambushed by Joesph Rosenbaum, who threatened to kill Rittenhouse and shouted the N-word multiple times earlier in the night. At first, Rittenhouse ran away, but when his avenue of escape was cut off by the cars, Rittenhouse turned around and shot Rosenbaum because the convicted child raper continued his attempted attack on Rittenhouse.

Rittenhouse ran toward the police line up the road, noticeably not shooting anyone else in the crowd, until he was attacked from behind and assaulted by Anthony Huber and Gaige Grosskreutz. A simple case of self-defense. The videos taken from that night and eyewitness testimony prove this.

Now, compare all of that from what we know about the Buffalo shooting. I've seen the video, I don't recommend watching it, but it is vastly different from the Rittenhouse case. The shooter pulls up to a grocery store and starts killing as many minorities as he could. It feels insane to say this, only because it should be obvious, but that is a stark difference from what happened in Kenosha. Justice being carried out in Rittenhouse's trial did not cause this recent shooting, plain and simple. Yet that has not stopped ignorant people from using the still-warm bodies of victims to push a false narrative.