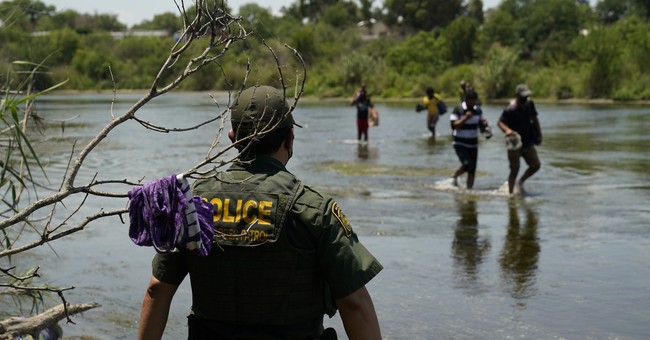 Border Patrol agents did not hold back in their reactions to Homeland Security Secretary Alejandro Mayorkas' remarks about the ongoing U.S.-Mexico border crisis in front of several Congressional committees this week.

Mayorkas defended the Biden administration's approach to the border crisis, which has been marked with record-breaking numbers of illegal crossings and American deaths resulting from fentanyl overdoses traced back to the southern border. Mayorkas told Congress DHS has "effectively managed" the crisis and assured lawmakers the southern border is secured.

More recently, a Texas National Guardsman deployed to the southern border under Operation Lone Star, Sgt. Bishop Evans, drowned in the Rio Grande after jumping into the water to rescue two people illegally crossing the river. The two people he saved are suspected of being involved in narcotics smuggling.

"Just curious as to what drugs [Mayorkas] is taking," one agent told Townhall. "I think he really believes his own B.S. I've been a Border Patrol agent for many years. This administration has done nothing except look for new ways to facilitate the illegal entry of people into the U.S. Morale is lower than the Mariana trench and it reflects in agent suicide rates."

"Instead of working to secure the border, Mayorkas has created an express lane for entry," the same source added. "I got a few years left of this crap 'til I can retire. Can't wait. So many great agents have left already and the new agents coming in couldn't track a herd of cattle across fresh snow. All they know is 'process faster.'"

"The only thing he’s 'effectively managed' was to piss off every single Border Patrol agent that proudly wears the badge day in and day out despite a lack of support or effective policies from this administration and management," said another agent. "Anyone with an ounce of common sense could visit the southern border and instantly realize the problem still exists and will increase 10 times if Title 42 is lifted."

Jon Anfinsen, the president of Border Patrol's Local 2366-Del Rio, Texas, said Mayorkas' visit to Capitol Hill showcased how wrong the Biden administration's approach to the problem they created is not working:

"The hearings this week did nothing but show us that this administration is delusional regarding the border. Yes, the immigration system has been broken for decades, but their supposed plan doesn't fix anything — it only makes it worse. Even the most vocal open-border advocates have to say that this is not working when they see videos of drowned people being pulled from the river and small children being found all alone at the river's edge.

"Secretary Mayorkas knows that it's not even remotely accurate to say we have operational control of our border, but he's also not going to say or do anything that the White House doesn't want him to do.

"We already have a process for people to lawfully request permission to enter the country, including for asylum, but why would anyone use it when the White House shows it would be faster for immigrants to swim across the river? They should be requesting permission and a date on which to present themselves at a port of entry, but Customs is still saying their bridges are closed because they have seen what has happened to the Border Patrol, and they want none of it. So their 25,000+ officers primarily get to sit on the sidelines while their sister agency struggles."

It was not just frontline agents who railed against Mayorkas.

"Secretary Mayorkas continues to lie about the border crisis, and Thursday was no exception. He refused to take responsibility for the historic crisis he and his boss in the White House have intentionally created. He failed to apologize for slandering the mounted Border Patrol agents in Del Rio whose careers he and the president ruined over a debunked political narrative," said Mark Morgan, the former acting CBP commissioner and visiting fellow at The Heritage Foundation.

"The only way to resolve it is to secure our border and end the policies that have encouraged record numbers of illegal aliens to enter our country. We must restore the previous administration’s policies that created the most secure border in our lifetimes."

It remains to be seen if Title 42 will remain in place beyond May 23. The Biden administration said they would stop the enforcement of the public health order that allowed agents to quickly expel illegal immigrants, but a federal judge issued temporary restraining order preventing it from being lifted for now. There has been growing concern that even more people will illegally cross the southern border once the Title 42 goes away. Migrants waiting in the Mexican border town of Piedras Negras, Coahuila told Townhall earlier this month they were waiting for May 23 so they can have an easier time entering the United States.