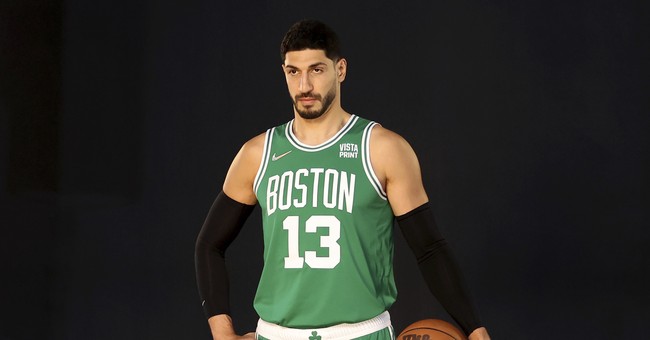 Boston Celtics center Enes Kanter Freedom officially became a U.S. citizen on Monday and told Tucker Carlson during an interview U.S. citizens who do nothing but complain about the country should shut up.

"It seems like people who move here from countries that are not free appreciate the freedoms here much more than a lot of us who grew up with those freedoms. Have you noticed that?" Carlson asked.

"I’m just going to say this and be honest, people should feel really blessed and lucky to be in America. They love to criticize it, but when you live in a country like Turkey or China or somewhere else, you will appreciate the freedoms you have here," Freedom said.

"I feel like they should just please keep their mouth shut and stop criticizing the greatest nation in the world and they should focus on their freedoms and democracy. America gave me everything I had, so I definitely appreciate the United States of America," he added.

The NBA star and outspoken human rights advocate changed his last name to Freedom to celebrate becoming an American citizen.

I am proud to be an American.
Greatest nation in the world.

The Land of the free, and home of the brave. ???? pic.twitter.com/8mbUX1dpWS

Freedom further put fellow athletes in the hot seat for saying they support human rights but stay silent when abuses are done in countries where they can make money,

"There are so many athletes, so many actors, so many celebrities out there who are scared because if they criticize China, obviously they will be affected. Endorsement deals, contracts, many would be a factor. They are scared to say anything. But to me, human rights, democracy, and freedom is way more important than anything they can offer me," he said.