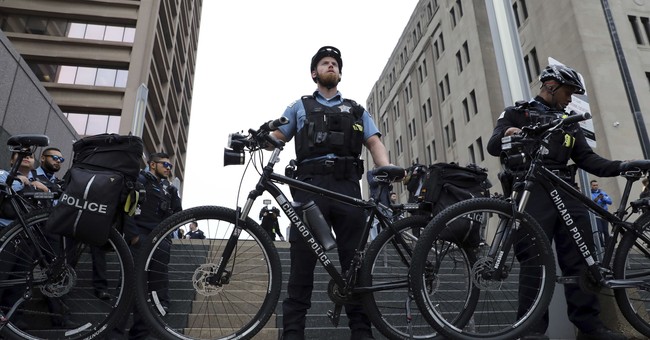 Chicago Mayor Lori Lightfoot (D) has been in a public battle with the Chicago police union over their resistance to comply with the COVID-19 vaccine mandate but now Chicago aldermen are voicing their opposition to how the situation has been handled.

The deadline for all city employees to submit their COVID-19 vaccination status via an online portal passed last Friday. Officers who did not report their vaccination status have since been stripped of their police powers and put on no pay.

Nearly half of the officers (19 of 43) who were called in yesterday and given direct orders to report their vaccination status still refused and were stripped of their police powers and put on no pay status. Per ?@FOP7Chicago? pic.twitter.com/VwCKplihFf

"I think she’s aware of the situation we’re in right now in terms of the potential impact on public safety. We’re already short police officers. We’re down, you know, probably about 20 percent from where our peak staffing levels were a few years ago, so we’re short patrol officers, we’re — we’ve been unsuccessful like jurisdictions all across the country at recruiting young people to choose careers in law enforcement," Alderman Brian Hopkins (D) told CNN on Tuesday.

"We have retirements happening at an accelerated pace. We can’t afford to lose a thousand police officers. We can’t afford to fire a thousand police officers over an impasse like this right now. So, I think the Mayor is aware of that. She’s in an untenable position, you know, as far as trying to bargain her way out of this. But frankly, she put herself in that position."

CNN's Alisyn Camerota asked Hopkins if he believes taking more officers off the streets will lead to an increase in crime.

"They already are. We had a police officer who was shot in my neighborhood yesterday. Fortunately, the bullet was a glancing blow, but it was off of his head. It hit him in the cheek, an inch in a different direction would have killed him over a relatively minor incident that just escalated," Hopkins explained. "We’re seeing that sort of thing happening where offenders are emboldened, they’re firing at police officers, and they’re engaging in crimes in neighborhoods that never saw the levels of crime that they’re seeing right now."