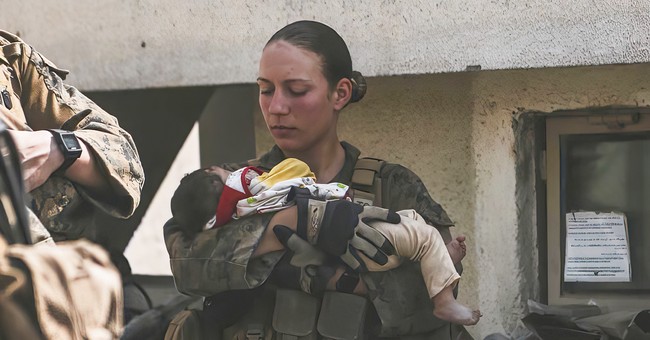 Some reporters on Capitol Hill felt the need to mask shame what they thought was a run-of-the-mill tour being given by Rep. Tom McClintock (R-CA) on Thursday since a few in the group were not wearing masks.

Masks requirement in the House

Yet here we are — group of 9, only 2 in masks pic.twitter.com/zsdwCoFPSG

The classic dilemma: a member escorts in a tour, clearly not “official business,” Capitol Police are not empowered to enforce much of anything when it comes to members. No one is enforcing masks.

As it turns out, McClintock was not escorting a random group of people. The California congressman was giving a tour of the Capitol building to the family of Sgt. Nicole Gee, who was one of the Marines killed in a terrorist attack during the U.S. withdrawal from Afghanistan. A total of 13 U.S. service members were killed in the attack, with over a hundred Afghans also being killed.

The family was also on official business since they were meeting with Minority Leader Kevin McCarthy (R-CA).

This photo was of @RepMcClintock and the family of fallen Marine Sgt. Gee. They were in the Capitol for an official meeting with @GOPLeader.

So, yes, it was “clearly official business.” https://t.co/6VtInbY5RV

Despite being called out for their tattle-telling, Politico's Heather Caygle continued her mask crusade even though members of Congress don't always follow the rule.

But could also wear a mask like everyone else here trying to stay safe.

How does that exempt them from wearing a mask?

In response to the tweets about the Gold Star family, McClintock told Townhall, "Res ipsa loquitur," which is Latin for "the thing speaks for itself."