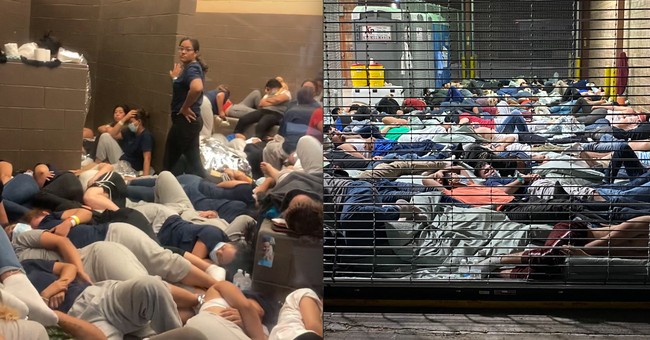 The Biden administration's handling of the ongoing crisis at the U.S.-Mexico border continues to flounder as the massive influx of people illegally crossing into the U.S. remains at an all-time high, leading to overcrowding at holding facilities with COVID-19 still being an issue.

Video taken this week by a source in the Rio Grande Valley Sector shows immigrants in a holding facility packed in tightly, with some not wearing masks. This has lead to Border Patrol having to take people apprehended elsewhere in the sector to the temporary holding site underneath the Anzalduas International Bridge in Mission, Texas, where outside temperatures reach above 100 degrees on a daily basis.

"They are way past capacity – so aliens sit outside because where do you take them? Logistically it’s a nightmare – people want to go to the bathroom, need to eat, women need to breastfeed, and the list goes on...This has surpassed the point of sustainability – this is lunacy," the source said.

NEW: This is the largest group of migrants we’ve ever seen being held by Border Patrol under Anzalduas Bridge in Mission, TX. Looks like it could be up to 1,000 people. We can only get a look at the area with our drone. There’s a popular Rio Grande crossing area nearby. @FoxNews pic.twitter.com/AsAygsO966

Former Acting Commissioner of U.S. Customs and Border Protection Mark Morgan told Townhall the Biden administration has been lying to the American public since the start of the border crisis.

"Early on when they were saying, 'Hey, nothing to see here, everything is under control,' they were talking about unaccompanied minors. They left out what was happening with single adults and families, conveniently, and I believe, again, they were doing that intentionally to misdirect and lie to the American people," Morgan said, adding the moving of unaccompanied minors to the Department of Health and Human Services shelters was a "shell game" because some of those sites have also experienced poor conditions due to the rapid set up after the crisis kicked off in February.

"Look at the damn pictures...Border Patrol is getting fed up and [agents] are sending out pictures," to show what is really happening, Morgan said.

Morgan said the capacity for two Border Patrol stations in the Rio Grande Valley Sector for illegal immigrants is around 600.

"Where is the mainstream media, where's the open border advocates and the Democrats who had crocodile tears in 2019? Where are they now?"

CNN reported this week how unaccompanied minors in HHS sites revealed they still are getting uncooked food, having long wait times for medical attention, and experiencing prolonged stays.

Julio Rosas
'Grave Sin': Nancy Pelosi Barred from Receiving Communion Over Abortion Stance
Spencer Brown
Should We Be Worried That Bill Barr Is Going to Cooperate With the January 6 Commission...Allegedly?
Matt Vespa
A European Country Is Working to Expand Abortion for Teenagers Without Parental Consent