'Dozens of Children Flow Freely Across the Border': Steve Scalise Describes the Immigration Surge in Texas 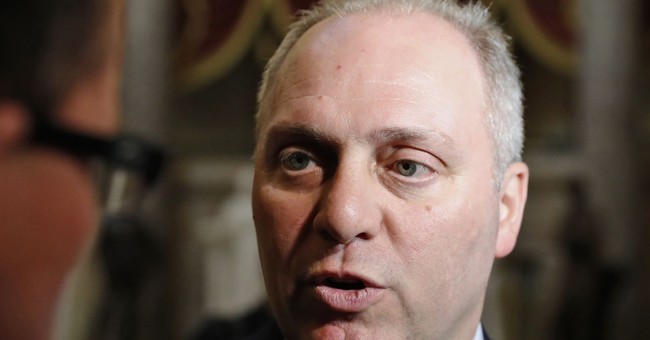 House Minority Whip Steve Scalise (R-LA) posted a video to his Twitter account to detail what he has seen at the U.S.-Mexico border in the Rio Grande Valley Sector amid the continued surge in illegal foot traffic.

"[They] came into the country illegally, ran across, just got apprehended by Border Patrol agents and it's going around all us. We've only been here for less than an hour and we've already seen multiple people coming across...Probably over 100 people in the last hour," Scalise said.

"And they're coming into America because Joe Biden has created this magnet where he said, 'The border's open' and look at what's happening," he added.

This is out of control. It’s the middle of the night. We’ve seen dozens of children flow freely across the border in just the past few minutes.

This is the reality of Joe Biden’s disastrous amnesty agenda. pic.twitter.com/kPCPAclpvd

Scalise was with other members of Congress who posted videos to describe what they have seen during the nighttime, which are the typical times people illegally cross into the United States.

I’m at our southern border. This is a crisis. pic.twitter.com/cqVj3jBQQC

??Update from the #BidenBorderCrisis: Last night we saw migrants flowing across the border in rafts. Border patrol agents told me this surge is due to the Biden administration ending the remain in Mexico policy.

This is more than a crisis. It’s a humanitarian disaster. pic.twitter.com/C5cZE9rde9

U.S. Customs and Borde Protection announced this week during the month of March they had "encountered more than 172,000 persons attempting entry along the Southwest border. This total represented a 71 percent increase over February 2021." At least 18,890 unaccompanied minors were taken into custody.

Recommended
Did Police Avoid Entering Texas School Because They Might Get Shot?
Matt Vespa
Share this on Facebook
Tweet
The Near Mass Shooting Most of the Media Won't Tell You About
Katie Pavlich
Don't Expect Baby Formula Shortage to End Anytime Soon
Sarah Arnold
Maybe the San Francisco School District Hasn't Learned Its Lesson After All When It Comes To Priorities
Rebecca Downs