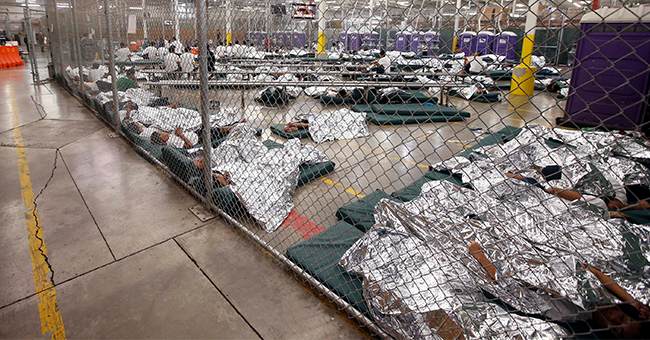 CARRIZO SPRINGS, Texas — I had left McAllen at 4:00 a.m. CT in order to drive the four hours to the child holding facility that had to be reopened due to the large number of unaccompanied minors flooding the U.S.-Mexico border in recent months. The trip had been planned through Rep. Chip Roy's (R-TX) office and I was told everything was in place for me to tour the facility with Roy and his staff.

Upon arrival, I could see children playing soccer in a field next to a building with a banner that said welcome in Spanish. Myself and a team from Breitbart News were told to get our temperature checked and be issued a KN95 mask. Once that portion was over we were told to wait outside to get a COVID-19 test. Once the test confirmed we were not sick, the tour would start shortly after that.

But then, the demeanor from the facility's staff changed. We were told to wait in an area away from Roy's people. A media person with the U.S. Department of Health and Human Services wrote our names down, with her remarking she had seen my name on the manifest, before walking away to confirm if we were to be allowed to accompany Roy. After a few minutes of waiting, she came back to inform us we were not allowed inside and we had to leave.

"Is there any particular reason why?" I asked.

What occurred Monday was a small example of the lockdown the Biden administration has placed on immigrant holding facilities amid the massive surge of illegal foot traffic at the southern border. It has been reported the facilities are way over their intended capacity, with one facility in the Rio Grande Valley being at 729 percent capacity, leading to poor conditions inside for long periods of time.

When asked if the media can tour any such facility to show the conditions inside, the White House and the Department of Homeland Security have said there were COVID-19 restrictions in place, which does not seem to be an issue if it is members of Congress visiting.

It's not just the detention facilities the Biden administration does not want members of the media to be present at. NBC reported border officials have been instructed to deny all media requests for ride-alongs and local press officers are instructed to send all information queries to the press office in Washington for approval.

Chris Cabrera, who is a spokesman for the National Border Patrol Council and Local 3307, told me while I was in McAllen journalists from other outlets are starting to come to him for comment because going through the official channels has been met with silence.

The media being iced out amid a crisis flies in the face of the "transparency" promise made at the beginning of the Biden administration.