Kayleigh McEnany Gets New Gig at Fox News As a Contributor 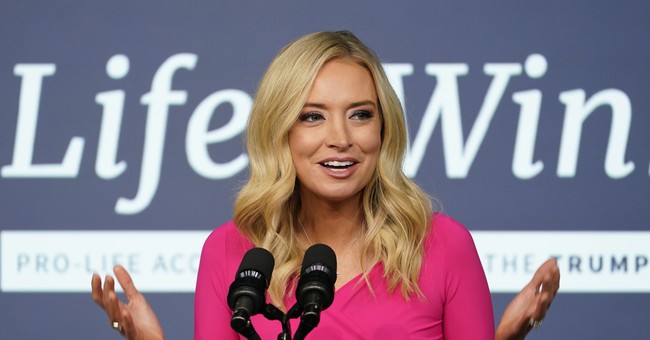 Fox News announced on Tuesday Kayleigh McEnany, President Trump's former White House press secretary, has officially joined the network as an on-air contributor. The announcement was made during her first interview since leaving the White House on "The Faulkner Focus."

"It is my distinct pleasure today to welcome @kayleighmcenany to the Fox family. We will be seeing much more of her in the future." pic.twitter.com/sV1eSMgCH4

The announcement was made during an interview done by host Harris Faulkner. She asked McEnany what her reaction was when the January 6 Capitol riot was unfolding.

"You know, I think at the beginning of the day before everyone went to the rally, everyone was expecting peace. We had been to hundreds of rallies. I’ve probably been to hundreds at this point. Certainly many dozens. They were nothing but peaceful events. We expected that day to be the same," McEnany said.

"As those events transpired it was disbelief, shock, somber, sad, horrified by the violence. It was a very hard, difficult day in the White House. There is no doubt. That was a unifying feeling in the White House. Let me say that differently. It was — I should say widespread feeling synonymous feeling, completely a feeling that everyone felt. Just completely condemning the actions of that day, horrified," she added.

McEnany said she does not believe former President Donald Trump is responsible for the riot.

"And I think Senator Tim Scott said it best when I heard him say, you know, those who hold responsibility are those who committed those heinous actions that we all condemn," McEnany explained. "What those rioters did — and the Left says he’s responsible or he’s incited this or even other Republicans, what I would say to them — well, these rioters, you know, if they were so inspired by what the president was saying, they left the speech early, because, reportedly, they showed up at the Capitol before the end of his speech, and then they did the exact opposite of what he said. He said, march peacefully and patriotically. And they did the opposite."

McEnany was praised among conservatives for her performance in the verbally combative press briefing room, bringing a large, well-organized binder that had answers to questions for a wide range of topics. She was also not afraid to consistently call out liberal media bias during the press briefings.

McEnany worked on Trump's 2020 campaign and had previously been an on-air contributor at CNN.

Bill Maher Notices Something Odd About These Transgender Kids
Townhall
Noam Blum OWNS Nina Jankowicz in back and forth after she ADMITS she just wanted to control domestic 'disinformation'
Twitchy
Durham Drops Another Bombshell, Reveals FBI Lied About Hillary Clinton-Supplied Disinformation
Redstate
The ‘Mary Poppins of Disinformation’ Inadvertently Spills the Truth About What the Board Was Going to Do
PJ Media