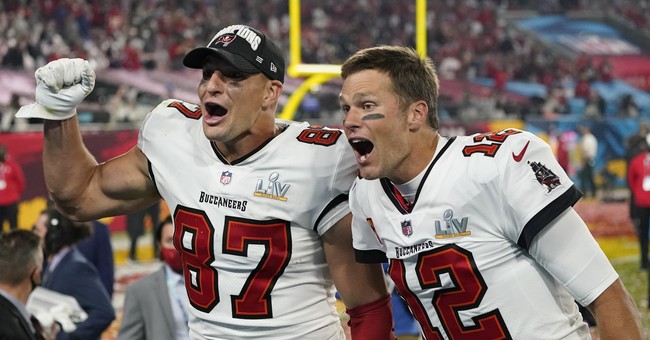 CNN reporter Randi Kaye was on the ground in Tampa, Florida, where said she asked the police if they were going to do anything about the hundreds of people who gathered outside to watch the Super Bowl because they were not wearing masks.

"They’re only supposed to take their masks off while they’re eating or drinking. But you can see quite a large crowd. Certainly not all in one single-family or one single household that are mixing. But that is allowed here in the city of Tampa right now," Kaye said while wearing two masks.

She then showed video footage of a different part of town where there was another large crowd outside, with many people also not wearing masks and not standing at least six feet apart.

"There were some police there but we’re unsure about citations. I spoke to the Tampa Police and I asked them, 'What are you doing about this? A lot of people were very concerned.' Apparently, the dance floors were full and that’s right now not allowed during the pandemic here in the city. And there is a mask mandate in any of these entertainment and event areas," she added. "If you’re not wearing a mask and you can’t safely social distance, you could be fined up to $500 but that’s obviously being largely ignored by many here in the city. The Tampa Police tell me that they’re very disappointed by what they’ve seen and some of these establishments do risk being shut down."

Kaye was criticized on Twitter for wanting the police to take action against Super Bowl spectators, while others were harsh towards the maskless crowds:

CNN reporter determined to get Super Bowl revelers in trouble with the law for not wearing masks.

She really needs to triple mask it! ?? https://t.co/Exew0Sb5iL

when hollywood eventually makes the covid horror movies, news scenes like this will definitely make the cut https://t.co/dIXLy3DdSQ