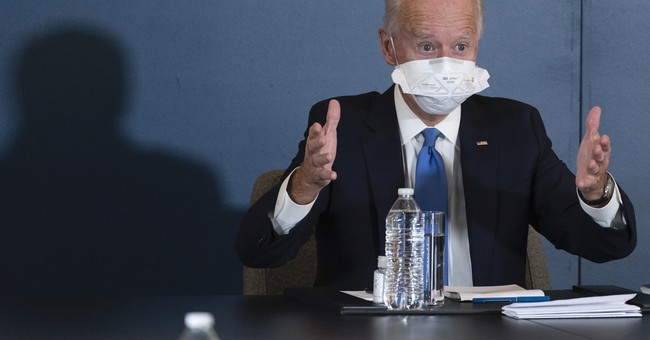 Joe Biden gave an unusual answer while giving his first post-election interview with Kamala Harris on how he would handle major disagreements with her in their administration.

"So I don’t have — when we disagree, it will be just like — so far it’s been just like Barack and I did. It’s in private. She’ll say I think we should do a, B, C, or D. And I’ll say I like a, don’t like B or C. Okay. And like I told Barack, if I read something where there’s a fundamental disagreement we have based on a moral principle, I’ll develop some disease and say I have to resign," Biden said.

Biden's answer was met with questions on what exactly he meant when he said he'll "develop some disease and say I have to resign." It could be an attempt at a joke, but no one laughed.

This is mostly notable for Biden's bizarre answer. But you also have to check out Jake Tapper's embarrassingly over-friendly posture, and failure to interject for clarification, much less pushback. https://t.co/OJw91TyFT7

I'm puzzled by this. Is he saying he'd resign as POTUS if he had fundamental disagreement with Kamala, or that she should be the one to resign because she'd be VP? https://t.co/TkSw07oweV

Biden on what he would do if he disagrees with Kamala:

"I'll develop some disease and say I have to resign." ?? pic.twitter.com/eUhamNMgwp

And Jake Tapper just moves right along like nothing happened ?? https://t.co/yZcs3UWBJW

I’m officially asking @JoeBiden to explain what he meant by this. pic.twitter.com/nfHjgQZunc