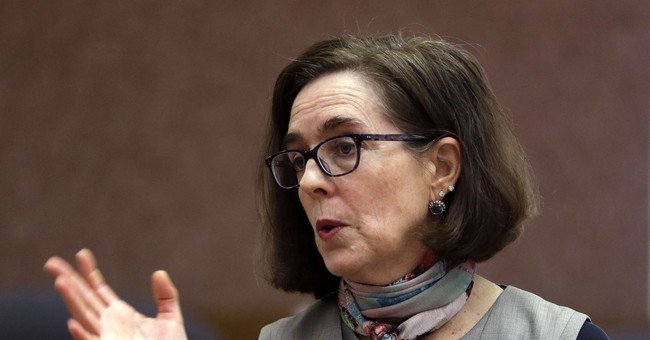 Newly acquired emails from Oregon Gov. Kate Brown's then-chief of staff showed she had support for the rioters who were causing damage throughout the city on a nightly basis and dismissing concerns about the destruction from business owners.

The Oregonian reported Jim Mark, the CEO of Portland real estate company Melvin Mark, had a "heated" email exchange with Nik Blosser, who now works on Joe Biden's transition team, in September. Mark was upset at the lack of action and words from Brown to protect the downtown area.

"We all want the violence to end, but honestly, their point that violence against them has been going on for a very long period of time rings very true, and real actions to change that needs to happen,” Blosser wrote in the Sept. 2 email.

"I know you all know this, and I’d like to see your support for real change for people be as public as your concern about the property damage," Blosser added.

Mark said he understood the difference between peaceful gatherings and the violent rioters taking advantage of people's frustrations with the justice system.

"They have destroyed minority-owned businesses while government, other than the Mayor, have said nothing,” Mark wrote. “This is not going to solve (the) equality issue, destroying the City of Portland. Very poor response and does not address the violence or destruction. A walk and discussion with minority-owned businesses Downtown, that have had to shutter because of the governor's lack of action might help."

Since then, Mark and other downtown business owners have started the Rose City Downtown Collective, which aims to provide support for businesses that are damaged or vandalized during unruly gatherings.

In an open letter, the Collective details how the riots make the costs of the COVID-19 lockdowns worse for them and their employees:

"Protest has long been the historical spark to ignite real change and the Rose City Downtown Collective could not be more proud to support the protests for civil rights happening in the heart of our great city. But the focus of the movement has been blurred by the ongoing chaos and criminal destruction that is happening night after night, often after the protests are done, taking the attention away from the actual movement.

"Just like its citizens, Downtown Portland is hurting right now. The pandemic has forced many of our great restaurants, local retailers, and local businesses to shutter, stay closed, and even relocate. The repercussions left by COVID 19 paired with over five months of nightly vandalism will affect business and life downtown for years to come. Our elected officials let us down this year, but we are hopeful that the new City Council will step up. "