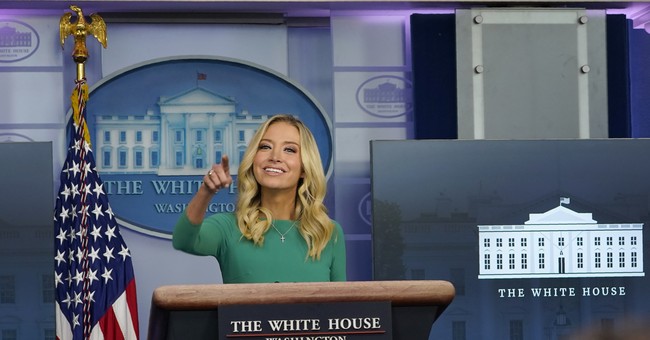 White House Press Secretary Kayleigh McEnany was in no mood to deal with some reporters' unserious conduct at the White House press briefing on Friday.

After McEnany provided an update to the COVID-19 vaccines being created, their distribution plans, and a recap of Operation Wrap Speed's progress towards a COVID-19 vaccine, she then answered questions from some reporters.

Playboy reporter Brian Karem instead decided to repeatedly shout "When will you admit you lost?" when other reporters were trying to ask their questions.

Still will not answer the question: When will you admit you lost? ?@realDonaldTrump? pic.twitter.com/3XiXgxG8jd

McEnany did not acknowledge Karem's outbursts. When McEnany concluded her briefing, she thanked those who asked substantive questions. Karem once more shouted, "Do you understand what the definition of sedition is? When will you admit you lost the election?"

NOW: question: “Do you understand what the definition of sedition is?” Also followed it with another question about admitting that they lost. Response... pic.twitter.com/b2hQtTBlH1

"I don't call on activists," McEnany replied before leaving the podium, appearing to have directed it at Karem. At the same time, CNN White House reporter Kaitlan Collins was also trying to ask a question.

"I'm not an activist," Collins can be heard saying.

It’s understandable why someone who hasn’t done their job — taking questions from reporters — in weeks would confuse someone else doing theirs with activism.