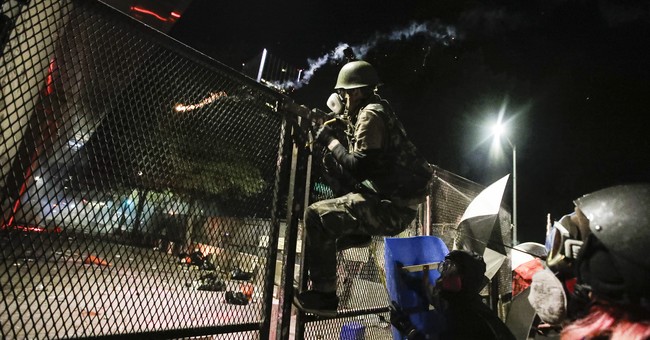 Mike Schmidt, who serves as the district attorney for Multnomah County, announced his office will not prosecute the rioters who have been arrested and charged with certain crimes during the months-long unrest the city of Portland has experienced.

There are currently more than 550 pending misdemeanor and felony charges that have been brought up since the protests and riots have started in late May after the death of George Floyd. Schmidt's approach to the charges will result in a "significant portion" of the 550 cases being dropped, according to opb.org.

"In a democracy where speech is so important, being the system that’s being criticized and then using that system to shut down speech,” Schmidt said, “I think we have to hold ourselves to an even higher level of tolerance for that speech to take place."

"The presumption on a lot of these cases that are listed out there is that we won’t prosecute,” he added. "But if there are egregious circumstances or something about the case that stands out, we can always choose to prosecute."

Charges that will be looked at to be dropped include:

Multnomah DA Mike Schmidt says some of the actions of protestors represent “the instinctive reaction of people who have been gassed repeatedly, who have been struck with kinetic projectile weapons, and who have seen other protestors arrested in ways they deeply disapprove of” pic.twitter.com/L7B4ue5ucH

Mike Schmidt om whether this police will cause lawlessness pic.twitter.com/udaAEMr4gA

Schmidt said his office will a "hard look" at cases where those charged with resisting arrest or assault of an officer where there was a use of force by the police.

"If you are a person who is out there demonstrating and you get caught up in the melee and you get arrested for that, because you are out there and having your voice heard, those are the types of cases we are talking about," he explained.

Schmidt promised those who were arrested for damaging property or causing violence will be prosecuted. The riots saw multiple local police and federal buildings being attacked on a nightly basis, including officers being injured by the thrown projectiles and commercial-grade fireworks.

The new policy from the @MultCoDA @DAMikeSchmidt makes it easier to get away with rioting, resisting arrest, escape, harassment, assault & more in Portland. #PortlandRiots pic.twitter.com/VRDwzXSqyl