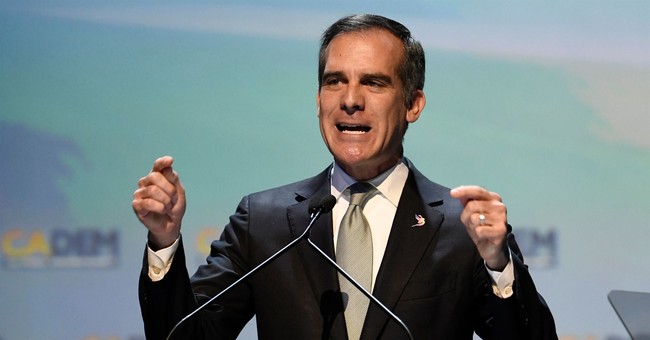 Los Angeles Mayor Eric Garcetti (D) defended his threat of shutting off water and power to houses who are violating the city's Wuhan coronavirus restrictions on large gatherings after taking action against businesses who violated the rules.

The threats come after large house parties have been taking place in the city's rich neighborhoods. One such party resulted in Los Angeles police officers being called in to shut it down.

"Some people have become complacent and lazy. You’ve had to deal, like many other states have, with people throwing big parties with large groups in L.A. You have been very aggressive in trying to stop these house parties and you have threatened to shut off water and power. Have you had to do that actually?" MSNBC's Stephanie Ruhle on Tuesday.

"We have with businesses. So this isn’t a new playbook for us. We try to educate first. Then we try to encourage. And finally, we enforce. We don’t start with enforcement, but those 'three E's as I call them, let people know what the rules are," Garcetti said. "If they are violating them, encourage them to abide by them and, if necessary, yes, we have with businesses at the beginning of this and throughout about 150 cases where we’ve had to refer them for criminal prosecution. Usually, by then, people become compliant."

"These are extremely dangerous settings. And so when necessary, we can bring in our civilian staff from our department of water and power. We own our own utility. That keeps these party homes, where people are turning a profit at the expense of our lives, off and sends a message to the rest that this is unacceptable," he added.

The Los Angeles Police Protective League, the LAPD's union, said they do not want officers to be used to shut down house parties.

Mayor Garcetti wants to reimagine policing. He should send his civilian staff to turn off people's electricity & cut off their water. Let officers deal with the rise in shootings and killings in LA. We need a leader and not a political contortionist. @TMZ https://t.co/LIfhBetRLV pic.twitter.com/KJEJLBp7vx

"Well, look, I do share concerns that not every huge party should be broken up by a couple of police officers. We have to look out for their safety and the safety of folks at parties... but this is really about the civilians that can come in and permanently shut down a house. Just because you can get folks out of there one night, these owners have a party the next night and the night after that," Garcetti said about the union's criticism.