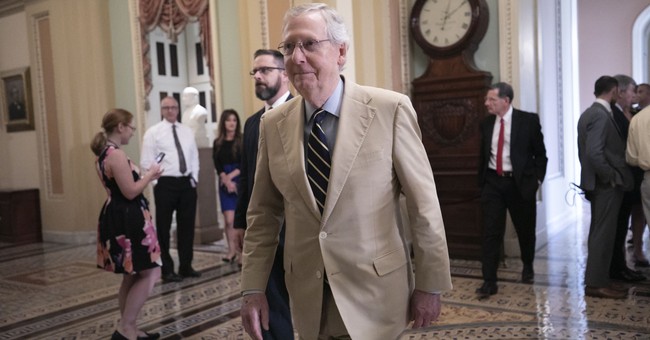 Jane Mayer, a staff writer for The New Yorker, tried to revise history in a new piece about Senate Majority Leader Mitch McConnell (R-KY) and the coronavirus relief package Congress approved in March.

The bill was at first blocked by Senate Democrats after Speaker of the House Nancy Pelosi (D-CA) returned from vacation and demanded non-related liberal policies be included in the urgently needed relief bill. After another set of negotiations, the bill finally passed the Senate a few days later.

Mayer gives a much different version of what happened within the first few paragraphs of her story:

"On Thursday, March 12th, Mitch McConnell, the Senate Majority Leader, could have insisted that he and his colleagues work through the weekend to hammer out an emergency aid package addressing the coronavirus pandemic. Instead, he recessed the Senate for a long weekend, and returned home to Louisville, Kentucky. McConnell, a seventy-eight-year-old Republican who is about to complete his sixth term as a senator, planned to attend a celebration for a protégé, Justin Walker, a federal judge who was once his Senate intern. McConnell has helped install nearly two hundred conservatives as judges; stocking the judiciary has been his legacy project.

Soon after he left the Capitol, Democrats in the House of Representatives settled on a preliminary rescue package, working out the details with the Treasury Secretary, Steven Mnuchin. The Senate was urgently needed for the next steps in the process. McConnell, though, was onstage in a Louisville auditorium, joking that his opponents 'occasionally compare me to Darth Vader.'"

"Eleven days later, the Senate still had not come up with a bill. The Times ran a scorching editorial titled 'The Coronavirus Bailout Stalled. And It’s Mitch McConnell’s Fault.' The Majority Leader had tried to jam through a bailout package that heavily favored big business. But by then five Republicans were absent in self-quarantine, and the Democrats forced McConnell to accept a $2.1-trillion compromise bill that reduced corporate giveaways and expanded aid to health-care providers and to hard-hit workers."

It is interesting to see Mayer refer to the Times' editorial as further evidence on how the bill's initial failure to pass was McConnell's fault given how their own reporting said Democrats were at fault. That is, until they changed the headline two times to make it appear that blame laid on both sides.

As for the trip, the House did not pass its version of the bill until March 14. It was held up from going over to the Senate because of technical mistakes that were not addressed and fixed until March 16. The bill was taken up by the Senate at the start of the business day on March 17.

Mayer made the same error as Washington Post "conservative" blogger Jennifer Rubin. The Post had to issue a correction after she falsely claimed McConnell was stalling the House's bill. The correction stated, "An earlier version of this article incorrectly said that Senate Majority Leader Mitch McConnell (R-Ky.) delayed a vote on the House’s coronavirus relief package. In fact, McConnell vowed to move at 'warp speed' on the bill and it was only delayed due to a demand from Sen. Rand Paul (R-Ky.) for an amendment on the bill. This version has been updated."