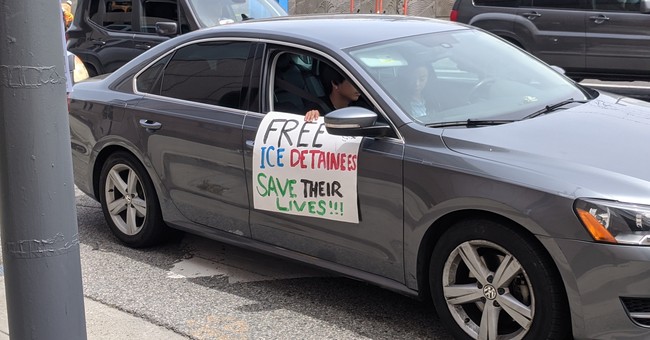 Los Angeles, Calif. — Multiple people showed up in their cars outside the Los Angeles Metropolitan Detention Center on Tuesday to demand Immigration Customs Enforcement (ICE) release all of their detainees from custody out of fear for their health and safety if there is an outbreak of the Wuhan coronavirus in ICE facilities.

Since social distancing protocols are being enforced by the city of Los Angeles, protesters drove around the block in their cars, holding signs, and honking their horns for their demands to be met. They were also calling on Gov. Gavin Newsom (D) to help free everyone who is currently in ICE custody.

Signs, that were held outside of cars or taped onto windows, read: "Release them all," "Let them out," "Detention is deadly," "F**k ICE," "Another Jew against concentration camps," and "Their blood is on your hands."

Outside the Los Angeles Metropolitan Detention Center where anti-ICE protesters are staging a car horn protest to demand ICE release all of its detainees for fear of coronavirus outbreaks while in custody.

Signs say, "Release them all," "Detention is deadly," and "Fuck ICE" pic.twitter.com/wyIrxDXrsP

The protest was organized by multiple groups such as Never Again Action — Los Angeles.

We are outside the DTLA Metropolitan Detention Center. We can see inmates cheering, waving, and banging on their cell windows. #releasethemnow#meltICE #detentionisdeadly pic.twitter.com/WAjgcg48jY

Matthew Hom, who is a part of Never Again Action — Los Angeles, told Townhall the protest was organized because during the ongoing COVID-10 pandemic, "we need to make sure that we free them all, release them all from detention because it's only one person who's infected who can turn an entire detention center into a death camp."

Hom said while some cities and counties have released some low-level, non-violent offenders, "it's not enough" because the county needs to be "preventing new arrests of non-violent crimes" to stop overcrowding.

When asked about the risk of releasing immigrants who are violent or have committed serious crimes, since their call is to release everyone, Hom replied, "We would believe ICE's system does not function to hold people who are criminals. It functions to terrorize families and tear children away from their parents."