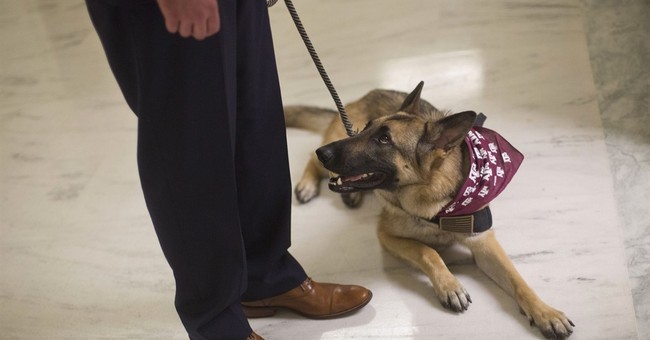 The House of Representatives unanimously passed the Puppies Assisting Wounded Servicemembers (PAWS) for Veterans Therapy Act on Wednesday. The bill now heads to the Senate for a vote.

If it becomes law, the bill will establish a pilot program for ten years in ten locations throughout the U.S. and would allow the Department of Veterans Affairs to provide grants to private organizations that trains services dogs to cover the cost for veterans who are suffering from post traumatic stress.

The bill, put forward by Rep. Steve Stivers (R-OH), received overwhelming bipartisan support prior to its passing in the House. The cost of the pilot program will be around $12 million over that ten year period.

"Our veterans fought for our freedom, and I’ve heard from many veterans who say that’s exactly what their service dog gives them – freedom.  They’re free to go to restaurants, to fly on planes, to go to the movies, things that post-traumatic stress had made impossible," Stivers said.  "Today’s vote is a huge step towards getting veterans the care they’ve earned and need.  I’m incredibly grateful to the cosponsors of this bill and look forward to it passing the Senate and becoming law."

Stivers, who is also serving in the Ohio National Guard as a Brigadier General, had Vietnam War veteran Walter Parker and his service dog, Jackson, as his guests for the State of the Union to advocate for the bill.

"With an average of 20 veterans dying every day by suicide, this bill isn't just about improving lives, it's about saving them," Rep. Kathleen Rice (D-NY) said. "The research has proven how helpful service dogs are for those living with post-traumatic stress, and the PAWS for Veterans Therapy Act will ensure veterans have access to this vital mental health resource. I thank Congressman Stivers for leading this legislation through the House, and I look forward to it becoming law. We must provide our veterans with the care they need and deserve."

In the Senate, the bill will be introduced by Sens Thom Tillis (R-NC),Kyrsten Sinema (D-AZ), Dianne Feinstein (D-CA), and Deb Fischer (R-NE).