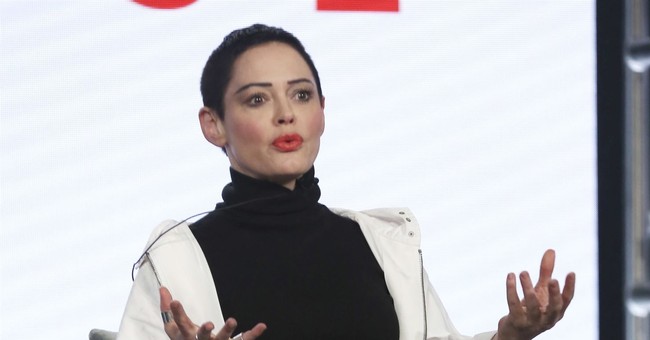 Actress Rose McGowan apologized to the leaders of the Iranian regime after the U.S. military killed Qassem Soleimani, the top general of their Quds Forces, in an airstrike on Friday. Kataib Hezbollah leader Abu Mahdi al-Mohandes, who was with Soleimani, was also killed.

In her message to Iranian leaders, McGowan posted a gif of an Iranian flag and said the U.S. had "disrespected your country" and claimed 52 percent of Americans "humbly apologize," adding, "We want peace with your nation. We are being held hostage by a terrorist regime...Please do not kill us."

Dear #Iran, The USA has disrespected your country, your flag, your people. 52% of us humbly apologize. We want peace with your nation. We are being held hostage by a terrorist regime. We do not know how to escape. Please do not kill us. #Soleimani pic.twitter.com/YE54CqGCdr

McGowan's tweet received heavy backlash, but she did not back down and went after those who criticized her.

Fuck your freedom and shove it up your #MAGA ass https://t.co/RQr2x5pCS1

Of course #Soleimani was an evil evil man who did evil evil things. But that at this moment is not the fucking point. The United States is morally corrupt and acts illegally. It is only logical to appeal to Iran’s pride by apologizing. I’m taking one for the team. #TeamStayAlive

I’m a registered Republican in California. I loathe the Clintons. I hate Trump. I will not vote Republican, but I cannot vote Democrat. I’d rather know what evil I’m getting, so I’ll go Republican. This is about WWIII, so none of that shit matters anyway. #TeamStayAlive #RoseArmy pic.twitter.com/l7MtDXUVuy

The Department of Defense explained the strikes were carried out on the orders of President Trump and in the aftermath of Iranian-backed militias attacking the American embassy in Iraq on New Year's Eve. Soleimani is also responsible for the deaths of 600 U.S. service members.

"At the direction of the President, the U.S. military has taken decisive defensive action to protect U.S. personnel abroad by killing Qasem Soleimani, the head of the Iranian Revolutionary Guard Corps-Quds Force, a U.S.-designated Foreign Terrorist Organization," the DoD said. "General Soleimani was actively developing plans to attack American diplomats and service members in Iraq and throughout the region. General Soleimani and his Quds Force were responsible for the deaths of hundreds of American and coalition service members and the wounding of thousands more."

The American embassy has since been reinforced with U.S. Marines from 2nd Battalion, 7th Marines who are attached to Special Purpose Marine Air-Ground Task Force Crisis Response - Central Command. Once on the ground, the Marines captured video of the militias lobbing fireworks and molotov cocktails inside the compound.