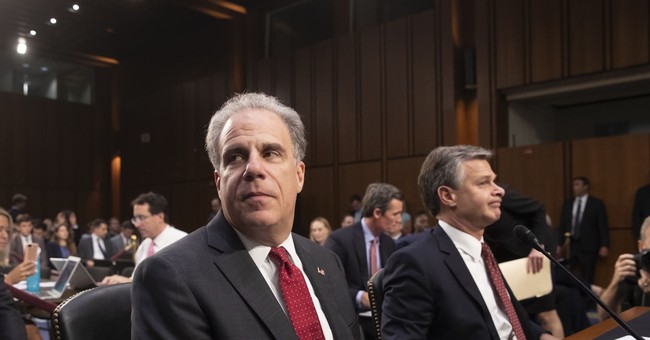 Michael Horowitz, the Department of Justice's Inspector General, testified to the Senate Judiciary Committee on Wednesday that the FISA applications the FBI used in their investigation into Trump campaign members were based on the debunked Steele Dossier.

Horowitz told lawmakers about the requirements FBI agents must meet in order to apply for FISA warrants.

"Nevertheless we found that investigators failed to meet their basic obligations of ensuring that the FISA applications were scrupulously accurate. We identified significant inaccuracies and omissions in each of the four applications, seven in the first and a total of 17 by the final renewal application," Horowitz said.

"For example, the 'Crossfire Hurricane' team obtained information from Steele’s primary sub-source in January 2017 that raised significant questions about the reliability of the Steele reporting. This was particularly noteworthy because the FISA applications relied entirely on information from the Steele — from the primary sub-sources reporting to support the allegation that Page was coordinating with the Russian government on 2016 U.S. presidential election activities," he explained. "However, the FBI did not share this information with department lawyers and it was therefore omitted from the last two renewal applications."

Horowitz's testimony is significant because some in the media were adamant in their claims that the Steele Dossier, complied by former British spy Christopher Steele, was not the basis for the FISA warrants or that the applications met the requirements.

Yes. I am telling you the dossier was not used as the basis for a FISA warrant on Carter Page.

This is a big lie. The investigation into the Trump campaign’s ties to Russia didn’t start with the dossier. (And the FISA surveillance didn’t begin until Page left the campaign. And it was based on more than the dossier. And the dossier wasn’t “falsely” submitted.) pic.twitter.com/PzL6QkMB8R