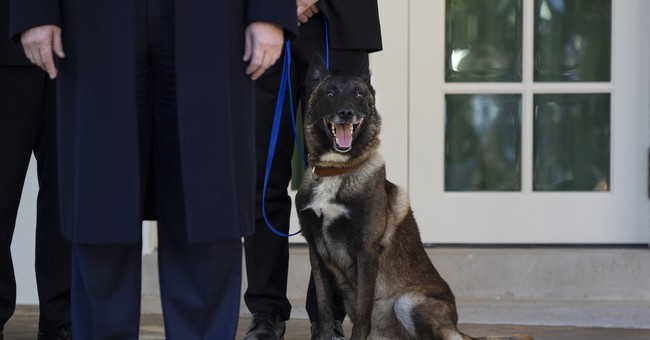 But if you were watching CNN, you would not have known the event was happening. CNN's show "Inside Politics" was in the middle of a commercial break when Trump started to speak to the press with Conan at his side. Fox News interrupted its regularly scheduled programming to air the event. Trump spoke for around six minutes.

MSNBC briefly covered the event live before host Andrea Mitchell cut back to talking about the news surrounding impeachment.

"Conan came over from the Middle East, just arrived with some of the great people from the special forces. It was a flawless attack and al-Baghdadi is gone," Trump said at the event. "That was a flawless attack and I guess they got quite a few of them. We just gave him a medal and a plaque. And I actually think Conan knew exactly what was going on. But a dog that is very, very special."

Trump also met with some of the special forces members that took part in the raid, but, for operational security reasons, were unable to go out in front of the cameras.

"We spent some good time with it. So brilliant and so smart. The way it was with the special forces people that have worked with him, for obvious reasons they can’t be out in front of the media. But they did a fantastic job and Conan did a fantastic job. We are very honored to have Conan here," Trump continued.

"Conan is not retiring yet, Conan is prime time," he added. "I asked them, about six years like an athlete. They start, they like to get them at one and a half or two years old and they go for about six years from that time. After that, it happens where it may the reflexes aren’t quite as good, you know, things like that happen...the dog’s prime time is six years after two, and they are very special dogs."

CNN did not return Townhall's request for comment in time for publication. The outlet does have a story about Conan's event on its website.