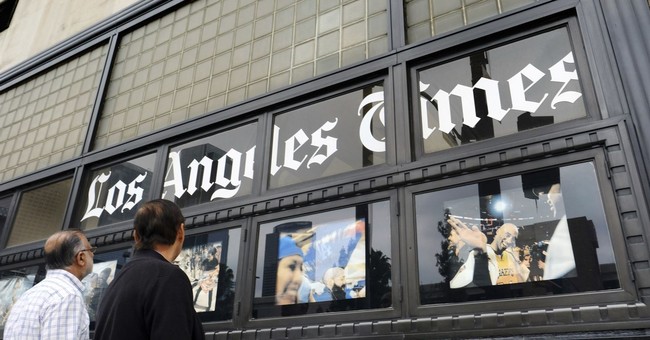 Los Angeles Times published a story with a questionable headline on Wednesday about the American families who were killed at the hands of Mexican cartels and their ties to families with a "long history of violence." Shortly after this story was published, the paper altered the headline.

The Times' story revealed how some of the victims belonged to the LeBaron family, who are related "to a prominent fundamentalist Mormon family by the same name." A cousin of the victims confirmed the relation to the Times':

The LeBarons are among “a handful of major groups of fundamentalists,” said Patrick Mason, a historian of Mormonism at Utah State University. But, he added: “The LeBaron name in recent decades has been most often linked to violence. Unfortunately, this incident only adds to that association.”

The family is perhaps best known for a series of killings perpetrated in the 1970s and 1980s, in both Mexico and the United States, by Ervil LeBaron — once called the “Mormon Manson” — and a group of his followers.

In 1972, two followers of Ervil LeBaron allegedly shot his brother, Joel, to death after the brothers argued over leadership of their religious faction. Ervil was convicted of the crime, but the conviction was later overturned. He later was tried and convicted in the 1977 murder of rival polygamist leader Dr. Rulon Allred. In 1993, his story was turned into a TV drama, “Prophet of Evil: The Ervil LeBaron Story.”

In 1993, a federal jury in Texas convicted three members of an offshoot of the community of LeBarons in the deaths of three former members and an 8-year-old child. One expert estimated that members of the group had killed as many as 30 people over the years.

"The extended LeBaron family has spoken out for years against drug cartel violence in Mexico and for looser gun laws, saying its members need to protect themselves," the Times' story continues. "The region where the attack took place Monday is disputed by two criminal groups, the Sinaloa cartel and La Linea, which is linked to the Juarez cartel. In 2009, family member and anti-violence activist Benjamin LeBaron was shot dead after speaking out against traffickers who kidnapped his brother for a $1-million ransom."

It did not take long for the article to receive heavy backlash, with people on social media accusing the story of blaming the deaths of 9 Americans, 6 of whom were children, on themselves.

What a disgraceful tweet and article from corporate media @latimes. The clear message: “well, these women and children who were gunned down by cartel monsters, they themselves had some pretty crazy relatives...or something”... https://t.co/9H6Ddaz721

This story is just terrible. A family is burying small children and now the media is dredging up completely unrelated events, committed by distant relatives, that happened more than a generation ago. Nice. https://t.co/ULPuM21Nbf

So they deserved to be massacred? What is the point of this headline? https://t.co/R9wSrfRSZS

Some distant relatives did something 40 years ago.... Did Mexico’s government take over your editorial board or do you just voluntarily help them smear victims of cartel violence? In Mexico they kill you twice, like I said. https://t.co/vObWXCj90A

Is the idea here that the victims had it coming? This is an insane piece. https://t.co/8xEVTZnVez

Sometime after the article was posted to Twitter, the headline was changed from "U.S. victims in Mexico massacre were tied to family with a long history of violence" to "Massacre of U.S. citizens aims spotlight at Mormon community with deep roots in Mexico."

The Times did not respond to a request for comment in time for publication.

While the change in the headline is somewhat better, it raises the question why is it necessary to create a whole story about of something some distant relatives did almost 40 years ago in the first place?