Three US Service Members Killed In Afghanistan By IED Blast 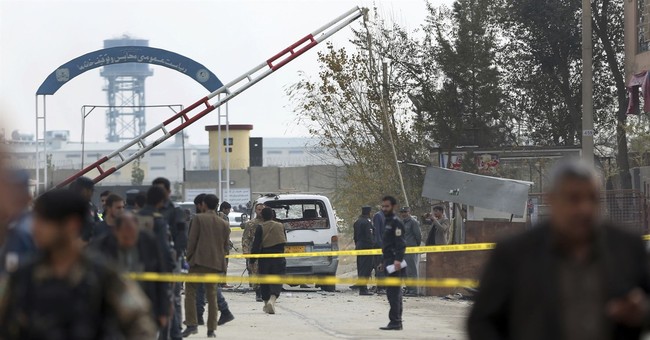 “Three U.S. service members were killed and three wounded when an improvised explosive device detonated November 27 near Ghazni city. One American contractor was also wounded,” Resolute Support said in a statement. “The wounded service members and contractor were evacuated and are receiving medical care.”

In accordance with Department of Defense policy, the names of the deceased will be withheld for 24 hours while their next of kin is notified.

The three service members’ deaths bring the total American deaths in Afghanistan for the month of November to five.

The attack today marks the single deadliest for U.S. forces in Afghanistan this year. 3 American troops killed by roadside bomb in Ghazni today. Last year, 3 U.S. soldiers from the 101st Airborne Division were killed in an "insider attack" in Afghanistan's Nangarhar province

On Sunday, the DOD had identified the soldier that was killed in the Garmsir District, Helmand Province, Afghanistan from “injuries sustained while engaging enemy forces” the day prior as Sgt. Leandro A.S. Jasso.

Resolute Support said upon further investigation, it appears Jasso was “accidentally shot by our Afghan partner force. There are no indications he was shot intentionally.”

"The loss of Sgt. Jasso is felt by his family and loved ones, by all who served with him and by all on this mission to protect our country and our allies," said Gen. Scott Miller, Commanding General of Resolute Support and United States Forces - Afghanistan.

"Sgt. Jasso was killed defending our nation, fighting al Qaeda alongside our Afghan partners," Miller added. "All of us, and throughout our coalition of 41 nations, recognize the threats posed by groups such as al Qaeda and ISIS and are determined to fight them here."

Maj. Brent Taylor of the Utah Army National Guard was killed in an insider attack in early November.