The Deeds Campaign: Seven days out and 11 points down 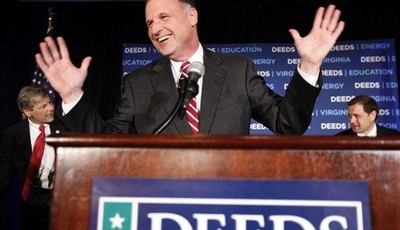 With seven days to go until the election, Creigh Deeds is looking at an extremely uphill battle in his quest to become the next Governor of Virginia. As Jillian Bandes recently wrote, a new Washington Post poll has the Republican candidate Robert McDonnell beating Deeds by eleven points in a poll of likely voters. President Obama, who is still popular in Virginia, may be scheduled to campaign for Deeds today but that fact alone can hardly negate the lack of enthusiasm for Deeds and the Democratic infighting that has plagued his campaign for several days.

An article in The Washington Post recently reported on the lack of excitement for a potential Governor Deeds. The article noted that "The campaign now sees its hope in rallying the core, liberal Democratic activists who have so far been uninspired by his candidacy and the broad coalition of minorities, young people and less-engaged voters who led Virginia to support Barack Obama after four decades of backing Republican presidential candidates." That article comes several days after the Post gave a high-profile endorsement of Deeds in an editorial, where in the article praising him, it was noted that Deeds "has run an enormous and possibly fatal political risk by saying bluntly that he would support legislation to raise new taxes dedicated to transportation."

Several days after that endorsement, the campaign found itself in the midst of Democratic infighting. With the Virginia gubernatorial campaign not going well for Deeds, the Post reported on Friday that "Democrats at the national level are laying the groundwork to blame a loss in a key swing state on a weak candidate who ran a poor campaign that failed to fully embrace President Obama until days before the election." Then, as CNN.com later reported, "A well-known Democratic strategist in Virginia is blasting the White House for placing anonymous quotes in the Washington Post in a pre-emptive effort to blame Creigh Deeds for what might be a loss in the state's upcoming gubernatorial election." The fighting between Democrats on a national level and Democrats on a state level shows how much trouble the Deeds campaign is currently in. If these Democrats thought that their candidate would win, they would spend less time arguing about who is to blame if their candidate loses.

Perhaps, Obama's appearence with Deeds will quiet talk about a rift between the White House and Deeds' campaign (not likely, though) but the infighting shows how off-track Deeds' campaign has gone. At a time when Deeds should be focusing on his campaign, he is talking about his relationship with the sitting president. It is no wonder that the Deeds campaign is now down by double digits in the latest Washington Post poll.

As Ken Blackwell recently wrote in a Townhall.com article on the subject, "Now is no time for cackling. It’s the time for hard work."