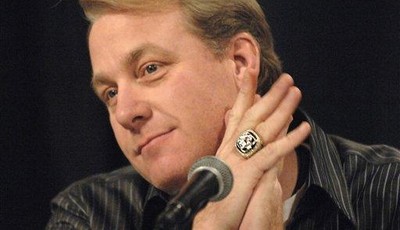 Matt Lewis recently posted a blog about the possibility of Curt Schilling running to become the junior Senator from Massachusetts. Schilling's entry into the race could be very interesting considering his popularity with Red Sox nation and the political makeup of the Bay State.

In addition to the interesting storyline of a well-known Red Sox player making a pitch for the Senate seat, there is also an interesting question to contemplate about the race: who has more pull in Massachusetts- the Kennedy name (and the liberal legacy thereof) or the Boston Red Sox. For one, both the Kennedy name and the Schilling name often inspire historical reflection. Ted Kennedy held his Senate seat for over forty years. Curt Schilling helped the Red Sox win their first World Series in eighty-six years. Democrats may be able to run as Kennedy liberals but Schilling could run as someone who helped reverse the "so-called" curse and make the Sox World Series champions in 2004, not a minor feat by any means.

Regardless, Schilling, in spite of the support that he has earned from Red Sox Nation, will still have a tough political campaign ahead of him if he chooses to run for the Senate. ESPN.com (not typically the home for political analysis) reported the following about a possible campaign for Schilling:

State election law would limit Schilling to running solely as an independent candidate because it requires those seeking a major party nomination to have been enrolled in that party for at least 90 days before the Nov. 3 deadline for filing nomination papers with the state Elections Division.

So if he ran, Schilling would be running as an independent to replace Kennedy, which could help him out in the Bay State. A Boston.com article from early in 2006 noted how  important independents are in the Commonwealth of Massachusetts. That article noted that "The Massachusetts Republican Party, despite its success in holding the governor’s office since 1990, is hardly a powerful machine. Only 13 percent of the state’s 4 million voters register as Republicans, while 49 percent decline to enroll in either party." Although the numbers have changed in the past three years, independents are still a major voting bloc in Massachusetts and they are a group of voters that Schilling could appeal to despite his previous support for Republican candidates like Senator John McCain in last year's presidential campaign.

Last year, I was in New Hampshire for McCain's last town hall meeting in that state before the election. On the stage that night, he was accompanied by several supporters including Mr. Schilling and Senator Joe Lieberman. Perhaps Mr. Lieberman, an independent Senator from Connecticut, could prove to be an example to Mr. Schilling as the pitcher weighs a possible campaign.

As Mr. Schilling knows, to pitch a game in baseball, you have to first walk over to the mound. The question is if Schilling is ready to take those long steps to the mound to start what could be the toughest game he has ever played.
Seattle Sure Waited a Long Time to Implement This New Policy on Rioting
Bronson Stocking
WATCH: Sen. Rand Paul Shreds George Stephanopoulos for Being a Liberal Hack
Beth Baumann