Flashing Anger with a Smile 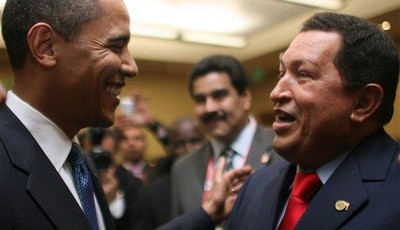 "A warm and friendly man with a robust sense of humor" is how Academy Award winner Sean Penn described Hugo Chavez in a recent column on the Huffington Post about Obama's recent encounter with the president of Venezuela. This critique is not surprising considering Penn's relationship with Chavez, but fortunately, there were more appropriate and reasonable responses out there, some from surprising sources.

Although some want to remake the Obama-Chavez handshake into a partisan issue with Democrats applauding Obama’s warmth towards Chavez and Republicans all aghast at the site, there is much more depth to the story. Liberal Washington Post columnist (and recent winner of the Pulitzer Price), who is no Obama adversary, recently wrote that Obama could have done something to show his disapproval of Chavez. Robinson wrote that "Chavez, Ortega and a few others, however, made a show of being rude. A flash of presidential anger from Obama would have been in order." Gloria Borger at CNN.com made a similar point in a column noting that "Sometimes, a dose of outrage and a flash of anger is warranted, even when you are on a mission to engage with the world." Neither Borger or Robinson are Republican pundits by any means but they both seem to agree that outrage and anger are tools that President Obama can and should be using when dealing with hostile foreign leaders like Chavez.

Although many people want to make the Obama-Chavez handshake into partisan politics, it is more than that. People on the left and the right are reasonably upset that President Obama did not do more to show his disapproval of some of Chavez’s policies in public. The photo with Obama smiling with Chavez and the images of Chavez handing Obama that book will unfortunately lead people to assume that Obama will not stand up against other hostile foreign leaders. Although Penn says that Chavez is “a “warm friendly man,” it seems like some liberals and conservatives still think that our country should be willing to give some foreign leaders a cold reception.