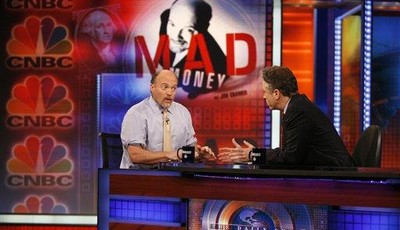 At a lunch meeting Monday with a fellow conservative blogger, I raised the topic of the media’s response to the Jon Stewart and Jim Cramer debate (if one can call it that). This fellow blogger had not even watched the full debate because of his discouragement with the fact that Stewart once again had "won". Although I can appreciate this blogger’s frustration with the contentious encounter between the Comedy Central comedian and the CNBC business analyst, I believe there is something inherently missing from the media debate and that is context.

Firstly, many are attempting to turn this debate into a proxy war for partisan arguments. Much of that argument stems from what Jim Cramer said on the “Today Show” when he “called President Obama's budget a "radical agenda," adding, "This is the greatest wealth destruction I've seen by a President.”"

However, it is important to note that -- though he is being attacked by liberals -- Cramer is no conservative -- and conservatives should not feel obliged to defend him. In October of last year, Cramer wrote the following in New York Magazine:

“And while any president will be an improvement over the current one, there is a growing belief on Wall Street that Barack Obama has the capacity to lead us out of this wilderness while John McCain does not. I’ll go a step further: Obama is a recession. McCain is a depression.”

Surely, one can not read the two statements and make Cramer into an ideological caricature of partisan politics.

Regardless of Cramer’s past statements, the debate between Cramer and Stewart evoked an extremely partisan reaction. Howard Kurtz, from the Washington Post, wrote of the exchange in an article:

“Online reaction tended to split along partisan lines. National Review's Mark Hemingway wrote that "Cramer's appearance on the show . . . was nothing short of a predictable sandbagging, with Stewart hopped up on faux indignation." But James Moore said on the Huffington Post that Stewart "has brought back context to journalism by making people in our drive-by culture responsible for their words and even actions."”

In an article at Politico.com, Tucker Carlson is quoted as saying that “His [Cramer’s] real sin was attacking Obama's economic policies. If he hadn't done that, Stewart never would have gone after him. Stewart's doing Obama's bidding. It's that simple."

Things aren't quite so simple though. In the past, Jon Stewart has been a media critic of both liberals and conservatives. One can easily remember that “Crossfire,” the political debate program on CNN that Stewart sharply criticized, featured conservative hosts such as Tucker Carlson and Robert Novak and liberal hosts Paul Begala and James Carville. Attacking that program did not seem like a complete partisan tirade, even to viewers of the show such as myself (though Tucker probably took more hits than Begala during that encounter). What is more, as Politico.com notes, “Three years after the "Crossfire," appearance, Stewart blasted Chris Matthews, describing the MSNBC anchor's self-help-styled book "Life's a Campaign" as a "recipe for sadness."” Since when did Chris “I felt this thrill going up my leg” Matthews become a beacon of conservatism?[# More #]

I would not go so far as to say that Jon Stewart is an equal-opportunity critic, but one can not ignore his past criticisms of liberals and his past pleasant conversations with conservatives. Republican Senator and 2008 presidential candidate John McCain has been on “The Daily Show” several times without receiving the sharp criticism that Matthews and Cramer received. Lynne Cheney, the wife of former Vice President Dick Cheney, was also interviewed on the program without incident even though Stewart has often harshly criticized Mrs. Cheney’s husband. Above everything else, Jon Stewart is a satirist. He may be a liberal-leaning satirist -- but he is a satirist nonetheless.

In terms of the question of the legitimacy of Stewart’s target, I would disagree with Stewart's implied notion that the world is somehow worse because of Jim Cramer. Although Cramer has a background in business, his show admittedly strives to be entertaining to an audience that may or may not be willing to watch a solemn analysis of business news. There is nothing wrong with that and there is nothing wrong with criticizing the format of the show but Jim Cramer is not the enemy here. He is not responsible for our economic downturn.

You might not know it from the way it was covered, but there was a really interesting and important exchange in the Stewart-Cramer debate that is being ignored by many in the media. In the third part of the debate (which can be seen here in its unedited format at the 3:50 mark) Stewart asks an interesting and seemingly conservative question: “When are we gonna realize in this country that our wealth is work?” Stewart, at this point, is making the point that there is no easy way to become wealthy. Isn’t that an inherently conservative philosophy? Conservatives believe in individual entrepreneurship, a strong work ethic and hard work -- with little government interference. Liberals are more inclined to believe in the power of government to support people, to revive the economy etc. Conservative radio show host Michael Medved has spoken on his radio show on numerous occasions about the importance of hard work in our society. Our nation's citizens do work hard and Stewart is right to wonder why people do not more often realize that hard work and the toil that millions of Americans go through every day is the best way for people to create wealth.

I told the conservative blogger that I had lunch with on Monday that he should watch the Cramer-Stewart debate, not to see who won the debate (Clearly, it was Jon Stewart) but to see what really transpired and to notice that this debate was not simply one between the right and the left. It was a debate about CNBC’s responsibilities in this country, a debate about the entertainment aspect of cable business and news programming and it was a debate about what went wrong economically in this country.