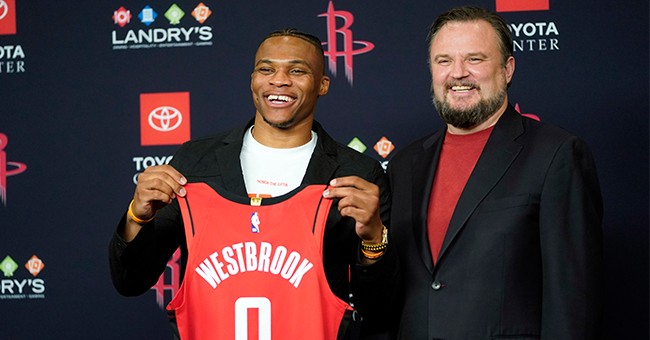 Houston Rockets’ stars James Harden and Russell Westbrook are reportedly pursuing trades, and, according to TMZ, they want to leave the team because its owner, Tilman Fertitta, supports President Trump.

I’m hearing that Tilman Fertitta’s strong Republican support and donations is one of the things that is contributing to this dissatisfaction, and those two [Westbrook and Harden] are not the only ones to want out of Houston. Lesser players are of the same mind. There is a revolt here because they look at Fertitta as a guy who supports the current president.”

According to KTRK news in Houston:

[R]ecords from the Federal Election Commission (FEC) show Fertitta donated to multiple Republican party campaigns - from the National Republican Senatorial Committee (NRSC) to the Republican Party of Texas and the Trump Victory campaign, with the exception of a $10,000 donation to the Arizona Democratic Party in December of 2019.

According to the Daily Wire, Fertitta predicted after Trump’s inauguration in 2017 that the president would be great for American business, saying, "[T]aking so much power away from the government and putting it back in business is going to be great for American capitalism. And why is America great? One reason: American capitalism. There’s been so much regulation in all aspects of the government over the last eight years that to deregulate all this regulation is going to be very good for the oil business, the energy business, the restaurant business."

If only the NBA took as strong a stance against Communist China as they do an American president that they happen to disagree with.