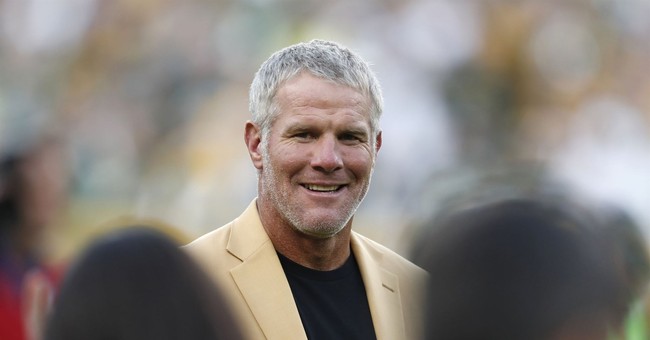 Favre tweeted that his vote is for “what makes this country great,” and cited freedom of speech, freedom of religion and the Second Amendment as some of the reasons for his support of Trump:

My Vote is for what makes this country great, freedom of speech & religion, 2nd Amnd, hard working tax paying citizens, police & military. In this election, we have freedom of choice, which all should respect. For me & these principles, my Vote is for @RealDonaldTrump. #Vote ??????

Both the Trump campaign and President Trump thanked Favre:

Such a Great Honor! Thank you, Brett! https://t.co/AocgUSqOTU

In July, Favre played golf with the president at the Trump National Golf Club, in Bedminster, New Jersey. They mostly talked football at the time, since Favre does not like to talk about politics.

At his NJ golf club this evening, Pres Trump attended a fundraiser hosted by @AmericaFirstPAC, a SuperPAC devoted to his reelection. Earlier in the day, WH posted photo of him playing golf with Pro Football Hall of Famer Brett Favre. (WH Photo by Tia Dufour) pic.twitter.com/7797oBNU0n

In an interview with Fox News at the time, Favre praised the president, saying that:

“He was as nice and engaging as he possibly could be, considering what type of stress he’s under. But I’ll say this: I respect the office of the president of the United States, regardless of who’s in office. Had Barack Obama, George Bush, Bill Clinton, anybody during my era, had they asked me to play golf, I certainly would have jumped at the opportunity, simply because regardless of what they believe in, just to be asked is an honor.

“We had a couple of holes where we picked up, no score was penciled in, but for the most part, he can play. He hits the ball very good, and I’ll also tell you this, he’s a fast golfer. There was times I had a 140-yard shot, and he’s up there at the green with his putter, ready to go.”

It will be interesting to see whether the support of Favre, who played for the Green Bay Packers for most of his career but also played for the Minnesota Vikings, will have an effect in helping Trump’s electoral chances in the states of Wisconsin and Minnesota.