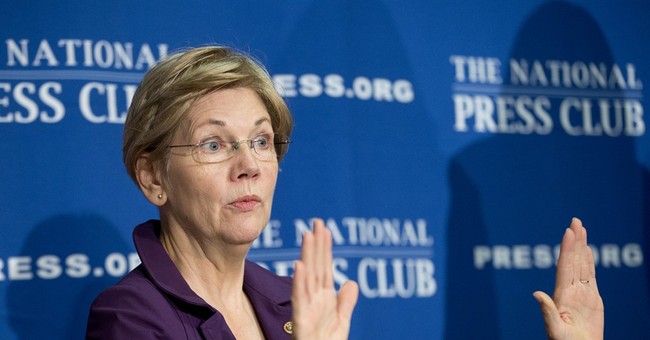 While some New Yorkers headed to Central Park Friday night to watch a rendition of "Julius Caesar" featuring a mock assassination of the President, others chose to fork over $45 or $50 (what? two classes of tickets?) to watch Elizabeth Warren stand on an empty stage and read from her new book, This Fight is Our Fight: The Battle to Save America’s Middle Class.

As the title implies, the bulk of the book is Warren's standard class-warfare-as-preached-by-a-culture-appropriating-Harvard-professor drivel, but, being the crony capitalist feminist that she is, the issue of "women's rights" and this year's women's marches get a good chunk of time.

While reading from her book, she couldn't resist sharing her favorite slogans from signs at the Boston Women's march:

"Women's rights are not up for grabs."

"And only one more, because I have to discipline myself on this. This is a good sign. Donald, you ain't seen nasty yet."

Warren went on to describe her experience at the women's march in Boston glowing terms:

We weren't fully organized yet, but the power was there. The energy everywhere. On a cold, bright Saturday morning, something special was happening. Every step brought us closer together. Everyone on Boston Common, everyone in Washington, everyone in little towns and big cities across America and around the world. Our very act of marching delivered the loudest possible proclamation of our deep down, unshakable belief that we can make democracy work again by insisting that this government serve the people. We are an army, an army filled with optimism and hope and fierce determination.

As I marched in Boston with tens of thousands of others that day, I had no illusions. I knew it would be a hard fight. I knew there would be dark moments. But I knew that we had tens of millions of people with us, and this fight would be our fight.

Elizabeth, sweetie, democracy DID work. And if we haven't already seen what "nasty" is, we'll pass.