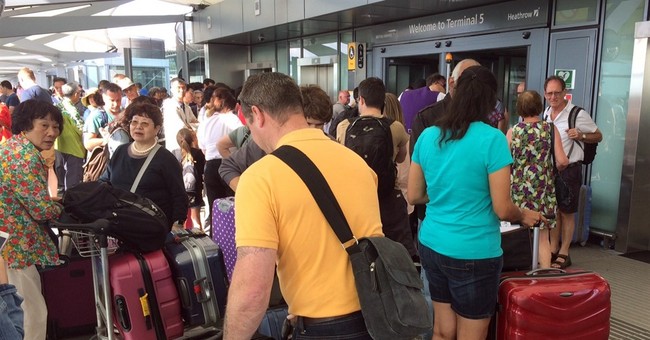 A global computer outage struck British Airways' systems early Saturday, at the beginning of a busy holiday weekend in both the US and the UK, forcing the airline to cancel all flights leaving both London Gatwick and London Heathrow airports.

British Airways said in a statement that cancellations could go into Sunday, but that most long-haul flights scheduled to land in London Sunday will arrive as scheduled.

Thousands of travelers are stranded, and they're taking to Twitter with pictures, videos, and descriptions of "total chaos."

@British_Airways @BBCNews @BBC_HaveYourSay this is the queue to get out of Heathrow Terminal 5! # pic.twitter.com/xulXM6jttu

Passengers at Heathrow were given a letter explaining how British Airways would compensate them for their delays. So they're expected to pay out of pocket for expenses and wait for a refund? That's compounding the nightmare.

Passengers are being told to leave their luggage there, and, understandably, are not pleased.

Late Saturday, British Airways CEO Alex Cruz posted a video on Twitter explaining what happened and that they are unable to rebook passengers right now because of the system crash.

Outbound passengers who haven't arrived at the airport yet are being asked to stay away until there is confirmation that flights have resumed. Passengers in the airport are tweeting that they've been standing in line for hours just to leave Heathrow and are unable to find food or water.

It sounds like one of the circles of hell in Dante's inferno.