In Saudi Arabia, Trump Asks, "Will We Be Indifferent in the Presence of Evil?" 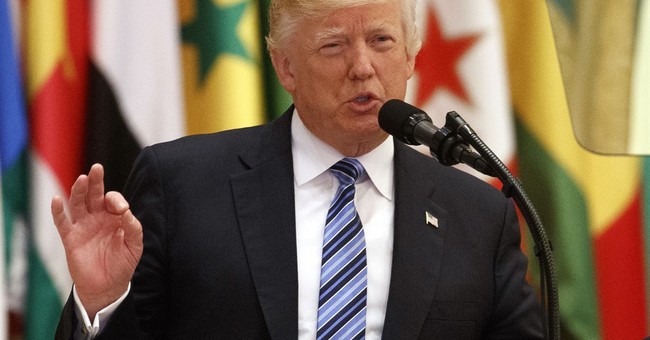 As Katie Pavlich reported Friday, President Trump's speech in Saudi Arabia focused on fighting the extremist ideology that inspires terror groups. The overarching theme of Sunday's address was that the Middle East can have a bright future - if they choose together "to conquer extremism and vanquish the forces of terrorism."

Trump's respectful, diplomatic tone was a contrast to his bombastic campaign speeches. He spoke of the history of learning and achievement in ancient Egypt and Iraq and pointed out that even in modern times people of Christian, Jewish, and Muslim faiths have lived together side-by-side in the Middle East, but that the extremist “foot soldiers of evil” have brought chaos, death, and destruction to the area.

Though many countries have been touched to some degree by bloodshed and terror, Trump pointed out that the Middle Eastern countries are paying the biggest price - not only in human lives, but economically.

“The true toll of ISIS, Al Qaeda, Hezbollah, Hamas, and so many others, must be counted not only in the number of dead. It must also be counted in generations of vanished dreams."

“When we see the scenes of destruction in the wake of terror, we see no signs that those murdered were Jewish or Christian, Shia or Sunni. When we look upon the streams of innocent blood soaked into the ancient ground, we cannot see the faith or sect or tribe of the victims – we see only that they were Children of God whose deaths are an insult to all that is holy.”

Trump has been criticized as wanting endless war in the Middle East, but said in today's speech that America wants peace, not war, and to work with the leaders of more than 50 nations assembled together to wipe out groups like ISIS, Hezbollah, Al Qaeda, and Hamas.

He touched on the theme of oppression of women and religious intolerance, but not to the degree some hoped - and he did not mention other human rights abuses, such as the execution of gays. He did tell the group that in addition to working to drive terrorist groups out of their countries, cut off terror groups' access to funding, and working together to combat online extremism, there's work for these leaders to do within their societies.

"That means honestly confronting the crisis of Islamist extremism and the Islamist terror groups it inspires. And it means standing together against the murder of innocent Muslims, the oppression of women, the persecution of Jews, and the slaughter of Christians."

In addition, Trump called for the isolation of Iran because of its support of terror groups and its "destabilizing intervention" in Syria, and general support of an extremist, terrorist, mindset.

After saying the next stop on his trip is Israel, where he will have discussions with Prime Minister Netanyahu and President Abbas, Trump closed by painting a rosy picture of what the future of what a post-"violent ideology" Middle East could look like.

"The birthplace of civilization is waiting to begin a new renaissance. Just imagine what tomorrow could bring."Glorious wonders of science, art, medicine and commerce to inspire humankind. Great cities built on the ruins of shattered towns. New jobs and industries that will lift up millions of people. Parents who no longer worry for their children, families who no longer mourn for their loved ones, and the faithful who finally worship without fear."