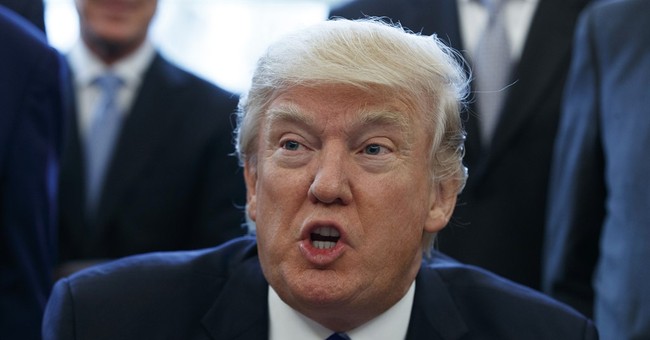 Instead of a Friday afternoon news dump, juicy Trump administration news comes through Saturday morning tweets from the man himself - and this week's are stunning in their lack of self-awareness.

Not even 24 hours after a massive defeat, he tweeted:

I'm sorry, Mr. President, but perhaps ensuring that you had at least everyone in your own party on board with this bill before it was announced would have been a good idea. Please, "all get together" before you try again.

He didn't let up Sunday:

Again, making sure that you had these groups on board before bringing the bill forward would have been a good idea.

Saturday, Axios reported that Steve Bannon's meeting with the Freedom Caucus did not go well.

Bannon reportedly walked into the conference room, and his first words were:

To which one representative replied:

"You know, the last time someone ordered me to something, I was 18 years old. And it was my daddy. And I didn't listen to him, either."

It didn't get any better from there. As the Hoover Institution's Bill Whalen said:

"How do you threaten people with political Siberia when they're already proud of being Siberians?"

Why Trump felt the need to burn so much political capital with this plan and an alliance with Ryan is baffling. Many thought he would lay blame at Ryan's feet for the defeat, but he's lashed out at all sides, not just Ryan. His other Saturday morning tweet, some believe, was a passive-aggressive foreshadowing of Judge Jeanine's call for Ryan's scalp.

At CPAC, Mike Pence emphasized that "President Trump is leading the fight to repeal and replace Obamacare," and, referring to himself and the President, said, "we are making a better law." that the ability to purchase insurance across state lines would be a part of their plan. This led people to believe that the administration had their own plan, but then the Ryan plan was rolled out in a completely illogical and strategically unsound way. This put Trump in a bind, but becoming a bullying, ultimatum-issuing cheerleader for the plan was absolutely the worst possible response.

The entire episode was an unforced error, enabled by a personality who lacks self-awareness - as evidenced every weekend on Twitter.