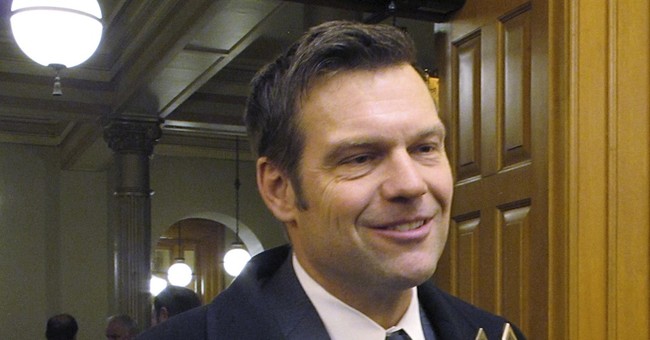 Kansas Secretary of State Kris Kobach is a frontrunner to become the next Department of Homeland Security Secretary. He has been in talks with the Trump team the past few days as speculation mounts.

In a weird turn of events, Kobach has inadvertently displayed parts of his plan (should he get the job) for the public to see. The photo was captured as Kobach met with Trump in Bedminister, New Jersey to discuss international terrorism, border security, and reforming bureaucracy.

Kris Kobach should learn to use folders and cover sheets. pic.twitter.com/q3sqB59wtA

His hand is obscuring a large portion of the document, but major tenets of his proposed plan can be discerned on the front page, which is titled “Kobach Strategic Plan for First 365 Days.”

Kobach wants to update and reintroduce NSEERS (National Security Entry-Exit Registration System), an immigration procedure used following the 9/11 attacks that aimed to prevent entry of terrorists and kept a registry of immigrants from high-risk countries. NSEERS was mostly disbanded in 2011.

Another bullet point calls for “extreme vetting of high-risk aliens.” Potential questions would include “support for Sharia law, jihad, equality of men and women [and] the United States Constitution.”

Kobach also wants to halt the acceptance of any more Syrian refugees and calls for deportation of a “Record Number of Criminal Aliens in the First Year.”

The rest of the text is covered up.

What do you think of Kobach’s proposals? Should he be the next leader of the Department of Homeland Security?