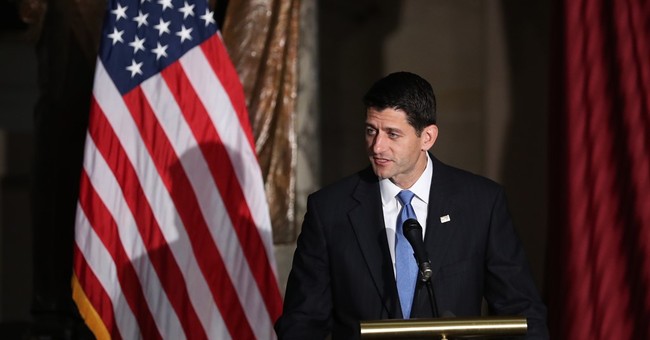 At the Economic Club of Washington Wednesday morning, Speaker Ryan was asked by the moderator if he’d consider running for the White House in the future. “You never say never to these things,” the Wisconsin Republican replied.

While stating that he didn’t want to rule the option out, he lamented that he never had the “ambition” to run for the nation’s highest office.

Giving hope to any ‘Ryan 2020’ supporters that this sentiment could change - Ryan said he used to find his previous job as Ways and Means Chairman as more enjoyable than being Speaker, but now feels the bigger role has grown on him.

Speaker Ryan explained his biggest goals are policy reforms. He also stressed the importance to him in spending time with his kids and making sure they live a normal life during their younger years. Despite a heavy fundraising schedule, Ryan visits his family in Janesville, Wisconsin every weekend.

A lot of speculation has gone around regarding a potential Paul Ryan run in 2020 or 2024. The Wisconsin congressman is extremely popular in Republican circles, has deep policy knowledge, and touts a national fundraising network resulting from his VP run in 2012.

Per the usual, Ryan has been hesitant of, but not outright against, the idea of a presidential run. Ryan supporters point to his initial reluctance to run for the speakership in which he was eventually pressured into.

Perhaps Republicans can push Ryan into a run for the White House, as well.