Barbara Bush Gave Up Her Republican Status Because She Hated Trump 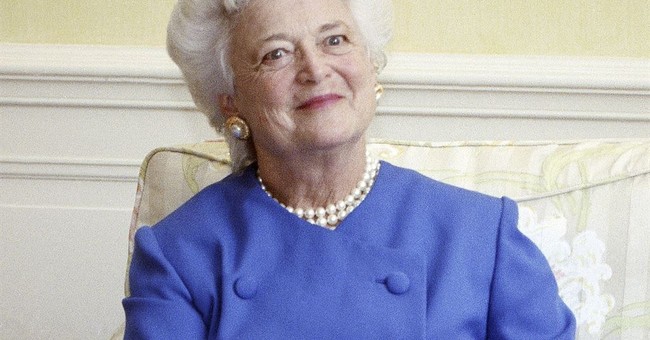 According to USA Today’s Susan Page, Barbara Bush told her that she blamed President Donald Trump for a "heart attack."

“It wasn’t technically a heart attack,” Page wrote. “Though she called it that. It was a crisis in her long battle with congestive heart failure and chronic pulmonary disease that hit her like a sledgehammer one day in June 2016. An ambulance was called to take her to the hospital.”

Page is the author of the upcoming book, “The Matriarch: Barbara Bush and the Making of an American Dynasty,” which Twelve Books will publish Apr. 2. Page met with the former first lady and learned that she no longer considered herself a Republican.

“I’d probably say no today,” she said in a February 2018 interview with Page. Four months prior, she said she still identified herself with the party.

“That was a stunning acknowledgment,” Page wrote. “Barbara Bush had been one of the most recognizable faces of the Republican Party through two presidencies. She was the matriarch of one of the GOP’s leading families. But after Trump’s rise, she saw it as a party she could not continue to support, a party she no longer recognized – even as one of her grandsons, George P. Bush, was on the ballot as a Republican running for re-election as Texas land commissioner.”

Bush had negative opinions about Trump since the 1990s, where she wrote in her diary how he was, “The real symbol of greed in the 80s.” When her son, Jeb Bush, ran for the 2016 election she campaigned for him. Page said that he felt he was in trouble after losing the Iowa caucuses.

Trump went to Twitter to poke fun at Jeb’s campaign.

Just watched Jeb's ad where he desperately needed mommy to help him. Jeb --- mom can't help you with ISIS, the Chinese or with Putin.

“Putin endorsed him, for heaven’s sake,” Bush responded. “Putin the killer! Putin the worst! He endorsed Trump! That’s an endorsement you don’t want.”

Page said that Barbara Bush recalled what her son told him. “Mom, don’t worry about things you can’t do anything about,” Jeb said to her.

“He’s right,” she told Page. “Just do good, make life better for someone else.”

“After Trump was elected,” Page wrote. “A friend in Kennebunkport gave her a Trump countdown clock as a joke. The red, white, and blue digital clock displayed how many days, hours, minutes and seconds remained in Trump’s term. She parked it on the side table in her bedroom, next to the chair she would sit in to needlepoint or watch television.”

Bush put the clock by her bedside table, where it remained when she died on Apr. 17, 2018.