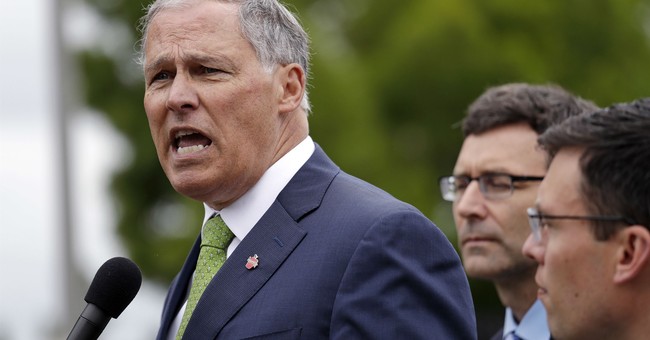 Washington state governor and 2020 presidential candidate Jay Inslee said that Washington State will be able to tackle the rising greenhouse gas emissions because voters finally gave him a Democratic majority in the state’s legislature.

Inslee went on air with MSNBC host Chris Hayes Tuesday, who asked the governor about his battle with climate change during his work in office.

"We have taken big steps,” Inslee said. “We've now built a wind turbine industry to $6 billion. We're the most per-capita, biggest users of electric cars. We're spinning carbon fiber to go into electric cars. I just got to cut the ribbon of our largest solar farm, and we're making bio-fuels—you can fly airplanes on biofuels now…so we’re doing a lot, but we need to do more."

"Doing a lot is not enough. This is the whole problem with this problem. I have been hearing you're doing a lot for a long time. They've got to go down," he said.

The Seattle Times reported in January that while Washington state made a plan to decrease gas emissions, “to 1990 levels by the year 2020,” it rose by 6.1 percent between 2012 and 2015. The Washington Department of Ecology said that this was partially due to, “increasing fossil-fuel-generated electricity and a booming economy.”

But Inslee suggested that it was because he wasn’t given enough power to make the big decisions.

Hayes asked how Inslee would respond to people questioning how he can defeat climate-change as president, given that the Republicans hold the Senate.

“Well first off,” Inslee said. “The voters have given me now a Democratic legislature, so for the first time I have a working (majority)… Right now, as we speak, we have several bills, including a 100 percent clean grid, a clean fuel standard that I hope will pass tonight in my House, a super pollutant bill, new building codes for net-zero buildings. So we’re going to move the needle.” He also told Hayes that Congress needs to get rid of the filibuster to, “shake up D.C.” and, “save the planet.”

Inslee said he hopes Hayes will host him again on his show to “pop the champagne corks.”