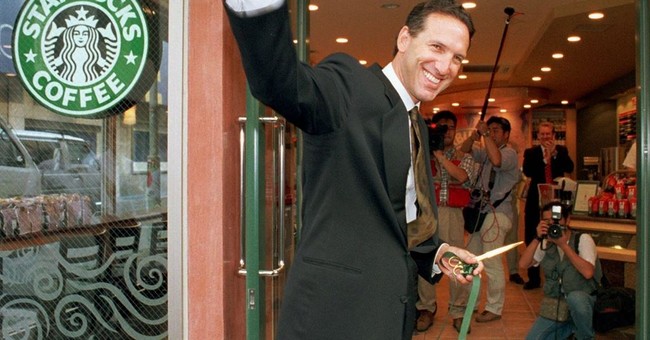 Former Starbucks CEO Howard Schultz laid out his goals if he were elected president at Purdue University in West Lafayette, Indiana.

Some of the issues Schultz discussed, if he decides to run, included healthcare, tax reform, the economy and education, subjects that he blames the “broken two party system” for dismantling.

Schultz quoted George Washington in his speech to drive home his point about the toxicity of the U.S.’s bicameral system.

“[George Washington] warned that factions can, in his words, ‘…become potent engines, by which cunning, ambitious, and unprincipled men will be enabled to subvert the power of the people. And to usurp for themselves the reins of government, destroying afterwards the very engines which have lifted them to unjust dominion,’” Schultz said.

At the same time, Schultz emphasized that he doesn’t think that people who associate themselves with a party have any malevolent goals.

“While I firmly believe our current president is unfit for office,” Schultz said. “And that our current two-party system is in dire need of repair. I don’t believe for a moment that individual Americans who call themselves Republicans or Democrats, are un-patriotic or ill-intentioned.”

Still, Schultz said he believes that the political figures in government no longer represent the American people, pointing to actions like gerrymandering as examples of their disconnection with the people’s interests.

“Does anyone in this audience really believe that our government is working well for the American people today?” he asked attendees.

When it comes to taxes, Schultz wants to provide cuts for the middle class and for small businesses. He also wants to make those with a higher income pay their “fair share.”

“I myself should pay higher taxes,” he said.

If he decides to run, Schultz said that he would release his tax forms.

Schultz believes in having gun regulations that provide universal background checks and prevent the mentally ill from obtaining weapons, all while still adhering to Second Amendment rights. He called out the far left and right ideologies for wanting to either get rid or guns or not consider “common sense” gun regulations.

“It is the highest responsibility of our government to protect our citizens,” said Schultz.

Schultz believes that in order to solve the immigration crisis, America needs to maintain a balance between common sense border security and ethical treatment of immigrants.

On the far left, Schultz said, politicians want to abolish ICE. On the far right, mass deportation. He said that neither are good solutions.

“We must enact the common-sense immigration reform,” Schultz said. This includes strong border security and protections for DREAMers.

Schultz touched on healthcare as well. He criticized Democrats for trying to eliminate private health insurance and criticized Republicans for trying to remove the Affordable Care Act without a viable replacement.

“The truth is that healthcare costs are the biggest driver of unaffordable care,” Schultz said. “Yet neither side has developed, let alone offered, a credible plan to reduce costs by increasing competition. Or requiring more transparency on prices from hospitals and drug companies. Or investing in preventive care. We must bring down healthcare costs, while increasing choice and access. The American people deserve no less.”

Schultz said that the extreme left wants expensive college programs while the far right doesn’t want to “spend and dime” on bettering the education system. The former CEO wants to establish a financial plan for education that “reflects the 21stcentury economy and the needs of today’s students and workers.”

In his speech, he brought up Arizona State University and said that they made higher education more accessible for students to be able to afford to stay. He also pointed to Purdue’s actions to make tuition less expensive in 2020.

Schultz also considers debt a key problem. He argued that federal programs that Americans need are going bankrupt and neither side proved to be responsible with the budget.

In a pre-speech excerpt provided to Townhall by Schultz’s media team, the former CEO states, “Our nation’s $22 trillion debt is threatening our economic future. The Left is proposing massive new programs, without any realistic plans for how to pay for them. The Right talks about fiscal responsibility, but then cuts corporate taxes, gives tax breaks to the privileged, at a time when we already can’t pay our bills.”

“I can assure you, no one wants Donald Trump fired more than I,” Schultz said.

“He’s [Trump] embroiled U.S. industry in a damaging and unnecessary trade war,” Shultz said. “He’s turned his back on long-standing strategic alliances. He’s walked away from the fight against ISIS in Syria. He’s pulled out of treaties designed to keep the American people safe. He’s turned a blind eye to Russian interference in our democratic process.”

“He’s poisoned our culture,” he said. “Giving hate speech, racism and bigotry license. I could go on. And on. Here's my response: Trump must not serve a second term.”