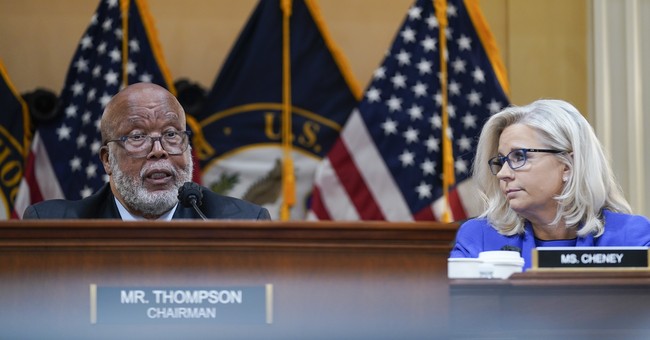 I watched the hearings in prime time last night, having offered some thoughts about the committee's work and credibility in print and on air in recent days. Let me start with this: As I said at the time, I've viewed the events of January 6, 2021, as a national disgrace that can never be allowed to happen again. On the one-year anniversary of that disgrace, I reiterated my views in this space and on television, again laying culpability for the attack on the Capitol at the feet of the rioters themselves, as well as former President Trump – whose series of baseless lies about a "stolen" election fomented the rage that served as a prerequisite for the chaos and violence that played out that day. Those beliefs remain unchanged.

As for this panel itself, for reasons mentioned in my first link above, I see it as flawed. I would have preferred a truly bipartisan investigation into 1/6, but that proffered option was declined by Congressional Republicans. It's therefore disingenuous for them to complain about the resulting Pelosi-appointed committee's partisanship, though it is fairer to question her decision to reject some of the would-be panelists offered by GOP leaders (who then boycotted the committee). It is also fair to cite The New York Times' framing of these proceedings as a last-ditch electoral appeal engineered by Democrats: "Jan. 6 Hearings Give Democrats a Chance to Recast Midterm Message," blares the headline. The subhead reads, "with their majority at stake, Democrats plan to use the six high-profile hearings to refocus voters' attention on Republicans' role in the attack." Politics. Some of the details within the report help demonstrate why many conservatives regard this as a partisan spectacle – namely, because some progressives are treating it exactly as such:

With their control of Congress hanging in the balance, Democrats plan to use made-for-television moments and a carefully choreographed rollout of revelations over the course of six hearings to remind the public of the magnitude of Mr. Trump’s effort to overturn the election, and to persuade voters that the coming midterm elections are a chance to hold Republicans accountable for it...They have retained an experienced television executive [formerly of ABC News] to ensure that happens and organized scores of watch parties across the country in hopes of generating interest...Democrats have met with networks about carrying the hearing live in prime time. Activists have scheduled more than 90 watch events in various states, including a “flagship” event at the Robert A. Taft Memorial and Carillon in Washington, where a large screen will be set up and attendees will get free ice cream.

"Resistance" watch parties with free ice cream do not seem to "meet the moment," to borrow an increasingly annoying cliche. On the other side, some Republicans complain that the presentation is one-sided, which is true, though many of the facts and evidence are damningly un-spinnable unto themselves. It doesn't really matter who's reading the words or running the tape. Critics say that important factors like the unpreparedness of authorities for the riot, which they at least partially blame on Speaker Pelosi, will get short shrift. All aspects of the treachery and myriad failures of January 6 should be thoroughly dealt with. But why and how the assault happened, and who was responsible for it, are the most important questions for any meaningful investigation to tackle. In short, there are some reasonable and unreasonable criticisms of this group and the task they're carrying out. With all of that said, a few observations:

(1) In last night's opening hour – which I suspect will ultimately garner the most focused attention of all the hearings, given that it was a summary of the evidence gathered – the nauseating video compilation of the attack was disturbing and potent:

That was not necessarily new, even though some of the footage hadn't been made public before. We've seen stomach-turning footage of the attack many times in the past, including during Trump's second impeachment trial. In addition to yet more awful clips of thugs beating police officers, this moment stood out to me:

This speaks to the mindset and motives of elements of the mob, some of whom clearly felt they were doing Trump's bidding that afternoon. Otherwise, Chairman Thompson's opening statement was long-winded and needlessly delayed the crux of the presentation: The aforementioned compilation, immediately preceded by Rep. Liz Cheney's detailed monologue, which was aided by video clips.

(2) There were some new allegations and revelations laid out, which committee leaders say they will deal with over the course of subsequent hearings:

“’Maybe our supporters have the right idea.’ Mike Pence ‘Deserves it.’” – Cheney quoting Trump during the chants of “hang Mike Pence.”

We also saw also multiple quotes and clips from former Trump advisers and lawyers testifying that Trump was informed that he'd lost the election by numerous people within his own campaign and administration and that he was told there was no dispositive proof (or anything close to it) that systemic fraud had impacted the outcome of the election. Of course, the Trump campaign had an opportunity to make its case in courts across the land – and they either failed or didn't even seriously attempt, to do so. We heard more about now-familiar malfeasances and deeply improper machinations from the former president in his wrongful efforts to avoid leaving office despite losing the election.

(3) People who despise Trump will hang on every word of these events. Others, who want to continue to believe that Trump was robbed, despite the lack of any credible proof, will be unpersuaded by anything emerging from this committee. Others are tired of January 6 in general and wish to move on. Still, others will be disgusted anew by what they see. They won't fixate on it, but they won't waive it away either. They consider what happened to be appalling, even if they're not enamored with any or all of the current inquisitors. This latter group is where I land, by and large.

Net-net, I doubt the overall political environment or electoral trajectory will be impacted very much at all, especially in the medium and long term, but quite possibly even in the short term. That doesn't affect the substantive reality of what is being gleaned or amplified. It is, however, my best reading of the political impact. Public opinion has turned very sour on President Biden and the ruling Democratic Party, based on governing outcomes. A huge majority of Americans believe the country is on the wrong track. What Donald Trump did in late 2020 and early 2021 doesn't move the needle on any of that. Maybe more Republican voters will conclude that nominating Trump again in 2024 would be a mistake, given his unquenched appetite for continuing to re-litigate an election he keeps denying he lost. Is that what most GOP voters really want moving forward? Will that mentality/obsession help the party regain the White House? Those are debates for the future, which may be informed by what's happening now. But the writing is on the wall for 2022, and November will be about inflation and various other crises, not January 6. I'll leave you with this "meanwhile" development, which literally played out during last night's hearings:

...These protesters are screaming into bullhorns to harass a justice because she disagrees with them on the interpretation of the Constitution. Yet, even law professors have praised the targeting of the homes of justices and even become "more aggressive." https://t.co/ZcVff2hWvH

Leftist agitators continue to picket the private homes of Supreme Court justices, for the purposes of intimidation, in violation of federal law. They do so having doxxed these justices, acts that have not been condemned by Biden or the White House. The doxxers are also publicizing the school ACB's kids attend. It's outrageous. And these acts persist despite the revelation of an assassination attempt against Justice Kavanagh early Wednesday morning. I tend to agree with all of this:

As Kevin Williamson explains, the time for Democrats to do the right thing was...before the things they claim to care about now. https://t.co/6gspUvjor9 pic.twitter.com/CZ4nMoEr1D