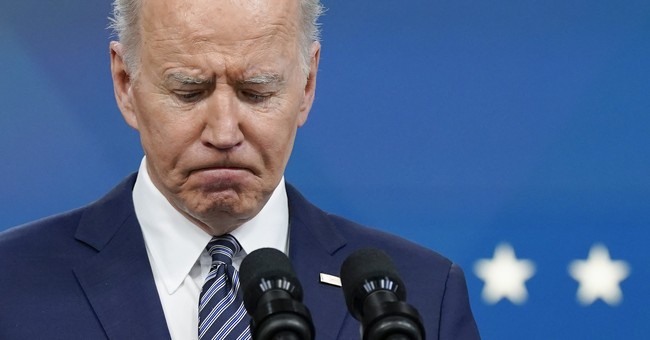 It's the political deep dive du jour that's going viral.  NBC News is out with a lengthy piece outlining the struggles of the Biden White House.  You can read the whole thing here.  It strikes me as something of an effort to spin things for the failing administration, while simultaneously delivering a devastating assessment.  Let's walk through it together, passage by passage:

(1) The story begins by relaying that the president is "rattled by" his low approval numbers and is casting about for a better messaging strategy.  Messaging is not his problem, however.  His problem is results.  His problem is how he's approached the presidency.  His problem is reality.  The piece ticks off some crises that have 'piled up,' making the White House look 'flat-footed.'  (Immigration, I'll note, was not among those listed).  But again, the issue isn't so much that the administration has been unprepared to deal with myriad crises, so much as they've caused or at least exacerbated them.  They can't 'message' their ideas well because their ideas are bad.

(2) The story suggests that a "shake-up" in the West Wing may be coming: "Should [Chief of Staff Ron] Klain go, a potential successor is Anita Dunn, a White House adviser and Biden confidant whom he often turns to when his fortunes look bleak. Dunn began working at the White House at the start of the term, then left and returned in early May at Biden’s specific request. No woman or person of color has ever been the White House chief of staff since the position was created after World War II."  The pre-framing of historic diversity is an interesting choice, given how that messaging strategy hasn't been winning over many voters, despite this administration's obsession with it (joined by much of the press corps).  I don't know if Dunn would be an improvement over Klain, who spends much of his time tweeting through bad news cycles.  I do know that her latest contribution was this gem, which Republicans have already used as a fundraising tool:

President Joe Biden’s “ultra-MAGA” label was the result of a six-month research investigation led by top Democratic operatives searching for an edge in the November elections, according to a new report...For six months, Democratic messaging guru Anita Dunn and the Center for American Progress Action Fund oversaw an effort to discern Republicans’ weak spot, according to the Washington Post. Dunn, a longtime Biden adviser, returned in May to the White House in a senior adviser role — the third time since the start of the president's term. “MAGA,” the group’s surveys and focus groups found, stood out in battleground areas for its negative ties.

(3) This is highly sympathetic spin that is ultimately self-defeating:

Any assessment of Biden’s performance needs to take into account the epic challenges he faced from the start. “They came in with the most daunting set of challenges arguably since Franklin D. Roosevelt, only to then be hit by a perfect storm of crises, from Ukraine to inflation to the supply chain to baby formula,” said Chris Whipple, the author of a book about White House chiefs of staff who is now writing a book about the Biden presidency. “What’s next? Locusts?” Biden wonders the same thing. “I’ve heard him say recently that he used to say about President Obama’s tenure that everything landed on his desk but locusts, and now he understands how that feels,” a White House official said.

Biden inherited problems, as every president does. Of course, his argument to voters was that he and his team would fix them, by dint of their competence and doing the opposite of Donald Trump.  He wanted this job.  He got it.  On a number of fronts, from COVID to the economy, to immigration, he could have achieved better outcomes my simply doing nothing, or close to it.  He also inherited COVID vaccines (despite false White House claims), an economy just waiting to rebound, and some successful illegal immigration mitigation policies.  He and his team have mismanaged pandemic-related spending, harmed millions of students by bowing to teachers unions' fake science, overheated the economy with inflationary spending that some Democratic economists warned against, and turbocharged the border crisis.  Afghanistan was another self-inflicted disgrace, the sheer incompetence of which may have informed Vladimir Putin's miscalculation in Ukraine.  Wondering aloud about outside forces like the plague is embarrassing.

(4) "Amid a rolling series of calamities, Biden’s feeling lately is that he just can’t catch a break. 'Biden is frustrated. If it’s not one thing, it’s another,' said a person close to the president," the story says.  The president is not an unlucky bystander.  The American people believe his policies have contributed to various problems because they have.

Beyond policy, Biden is unhappy about a pattern that has developed inside the West Wing. He makes a clear and succinct statement — only to have aides rush to explain that he actually meant something else. The so-called clean-up campaign, he has told advisers, undermines him and smothers the authenticity that fueled his rise. Worse, it feeds a Republican talking point that he’s not fully in command.  The issue came to a head when Biden ad-libbed during a speech in Poland that Russian President Vladimir Putin “cannot remain in power.” Within minutes, Biden’s aides tried to walk back his comments, saying he hadn’t called for Putin’s removal and that U.S. policy was unchanged. Biden was furious that his remarks were being seen as unreliable, arguing that he speaks genuinely and reminding his staff that he’s the one who is president. Asked about the staff’s practice of clarifying Biden’s remarks, the official said: “We don’t say anything that the president doesn’t want us to say.”

This has happened repeatedly, often on foreign policy. We've seen it in the context of combatting Russia and China. It just happened again, on the heels of a third Taiwan 'clarification' in the span of nine months. If Biden is making major changes to US policy, and his team keeps undermining him and reversing his statements, he needs to fire people. He hasn't done that.  That is far worse than 'feeding a Republican talking point.'  Indeed, the talking point appears to be accurate.  Is it America's policy that Russia should undergo regime change?  Are we militarily committed to defending Taiwan against a (not unlikely) Chinese invasion?  Which walk-backs were correct, and which rankled Biden?  Perhaps the president could answer these questions, but he doesn't really do interviews.  Notice that the final line of that excerpt is, unto itself, a walk-back.  Biden is grumbling to reporters that he's being undermined with walk-backs, and an unnamed official immediately says there are no walk-backs.  It's walk-back inception.

(6) Whining about unfairness and lack of credit is not a great look:

Biden has vented to aides about not getting credit from Americans or the news media for actions he believes have helped the country, particularly on the economy. Unemployment rates have dropped to below 4 percent — pre-pandemic levels — but polling indicates most Americans believe the economy is in bad shape. Biden grouses that Republicans aren’t getting their share of the blame for legislative gridlock in Congress, while he’s repeatedly faulted for not getting his agenda passed...“He’s now lower than Trump, and he’s really twisted about it,” another person close to the White House said.

It shouldn't be surprising that a populace getting hammered with inflation isn't in much of a credit-giving mood on other economic factors. Biden's been a professional politician for decades. How could this surprise him? And perhaps voters aren't blaming Republicans because Democrats control all of Washington? Some of the big ticket agenda items have tanked not because of GOP obstruction, but because the Democrats couldn't get all of their people on-side for things like a $5 trillion 'Build Back Better' inflation-exploding disaster. And some of the economic gains Biden for which demands attaboys are actually being driven by red state leaders pursuing policies he opposes and attacks.  The NBC story also points out that Biden is briefed regularly on polling, despite his insistence at a press conference that he doesn't look at polls.  "Not a joke," he said of that assertion.  Perhaps it was more of an old-fashioned lie.

(7) I'll leave you with this kicker of a quote: “We’re on a track — a losing track,” Faiz Shakir, a senior adviser to Sen. Bernie Sanders of Vermont, said of the Democrats.