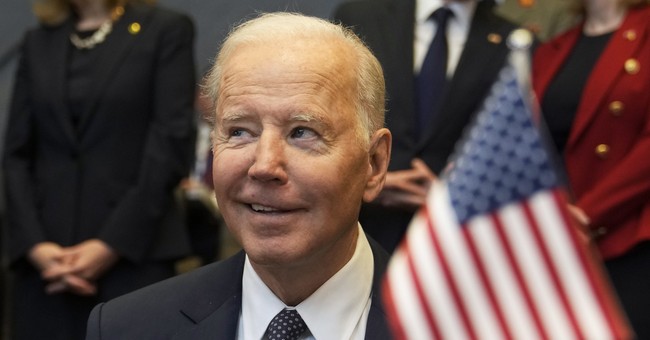 Much of President Biden's speech in Warsaw, Poland, on Saturday was strong and forcefully delivered, certainly by his standards. But the major headline takeaway, quite literally, was an ad-lib remark, injected on the fly by the president near the very end of his address. He effectively called for regime change in Moscow, asserting that Vladimir Putin "cannot remain in power." In uttering just a few unplanned words, Biden made enormous geopolitical news:

That feeling when the thing you supposedly didn’t mean to say is the only thing anyone can remember... pic.twitter.com/Mhpe3g95Pi

Not the landing page you were hoping to see at U.K.’s landing page as @JoeBiden returns home: “Chaos” in aftermath of @POTUS speech. Sigh. pic.twitter.com/ZG7sfx0Q61

Will many people agree that the world would be better off if Putin – a brutal thug – and his band of kleptocrats were no longer running Russia? Of course. People arguing that Biden was right to say what he said are appealing to this widely-shared sentiment. But the words of the president of the United States carry substantial weight, and statements that are tantamount to calls for regime change in a foreign government cannot be unleashed flippantly. That's especially true in the middle of a hot war, ordered by an increasingly isolated, desperate and humiliated despot who controls the largest nuclear arsenal in the world. Some people have strained to compare Biden's declaration to President Reagan's famous "tear down this wall" speech in 1987 Berlin. This parallel is ridiculous. Reagan's powerful exhortation was the subject of fierce internal debate, with advisors repeatedly trying to excise the line from the text of the address. Reagan insisted that it remain in the script. The president prevailed and delivered a line that has since echoed through history.

By contrast, Biden threw in his Putin point in the heat of the moment, and the White House immediately walked it back. Those defending Biden's extemporaneous statement as correct must grapple with that fact – Biden's team instantly disclaimed it in a frantic clarification. This explodes the Reagan analogy, of course, but it also proves that the Biden administration saw it as an error and moved rapidly to limit the perceived damage. This observation is inarguable:

Yep. Two possible explanations. Not sure which is worse. https://t.co/ESJ3tpGZL1

It also plays into a problematic pattern of Biden undermining his own administration's official positions with careless language, requiring repeated clean-ups. Think of what we witnessed over the course of three days last week (Thursday through Saturday) alone. The president crankily contradicted oft-repeated White House talking points about the intended deterrent effect of sanctions against Putin, making his vice president, secretary of state, and other top officials – his whole operation, really – look silly in the process:

Today Biden again said that sanctions would not “deter” Putin from invading Ukraine.

His administration said the EXACT OPPOSITE for weeks.

"Sir, deterrence didn’t work. What makes you think Vladimir Putin will alter course based on the action you’ve taken today," Biden was asked by CBS reporter Christina Ruffini during a press conference at a NATO summit in Brussels, Belgium. "Let’s get something straight. You remember if you covered me from the very beginning, I did not say that, in fact, the sanctions would deter him. Sanctions never deter. You keep talking about that. Sanctions never deter," Biden responded...Biden's remarks come after weeks of messaging from key Biden administration officials – including Vice President Kamala Harris and Secretary of State Antony Blinken – who claimed the sanctions placed on Russia were meant to deter the actions of Putin. Asked in February whether she believed sanctions would deter Putin, Harris said at the time, "Absolut- — we strongly believe — and remember also that the sanctions are a product not only of our perspective as the United States but a shared perspective among our Allies.  And the Allied relationship is such that we have agreed that the deterrence effect of these sanctions is still a meaningful one, especially because – remember, also – we still sincerely hope that there is a diplomatic path out of this moment." ...

Harris also said in February that the "purpose of the sanctions has always been and continues to be deterrence." Prior to Russia's invasion, during an interview with CNN, Blinken insisted that the "purpose of the sanctions in the first instance is to try to deter Russia from going to war." Similarly, in February, White House press secretary Jen Psaki said "sanctions can be a powerful tool" and that the overall goal of imposing sanctions on Russia was to "have a deterrent effect." During that same briefing, Daleep Singh, deputy national security adviser for International Economics, said sanctions "serve a higher purpose" and that is to "deter and prevent." During an appearance on 'America's Newsroom' in February, Pentagon press secretary John Kirby said the administration wanted the sanctions "to have a deterrent effect." "We want them to have a deterrent effect, clearly," Kirby said.

That was only the beginning. Biden also said that the United States and NATO would respond "in kind" if Russia used chemical weapons in Ukraine. "Responding in kind" means to respond in the same manner. It should be obvious that Western powers would not retaliate against such aggression by using chemical weapons themselves, but that's what Biden said. He also suggested, in remarks to US troops stationed in Europe, that they were "about to see" horrors inside Ukraine – prompting concerns about a "boots on the ground" deployment. Both statements were met with inevitable mop-ups:

Multiple times on this trip the WH has clarified Biden’s remarks:
- US won’t use chemical weapons after Biden says US would respond to Russian chemical attack “in kind”
- US troops won’t go to Ukraine after telling 82nd airborne of what horror they’re “about to see”

This is a series of amateur hour blunders by the Commander-in-Chief, in a highly sensitive and combustible environment. Four instances of incoherence and contradiction in less than a week, under the searing lights of international scrutiny in a time of war. I'll leave you with this – it's not a good sign at all when your secretary of state is compelled to go on television to explain that the US government is not, in fact, calling for regime change in Moscow, shortly after you...essentially called for regime change in Moscow. They must know how weak this spin is, but what choice do they have?

The White House is clarifying President Biden's statement that Putin "cannot remain in power," saying Biden meant "Putin cannot be allowed to exercise power over his neighbors or the region." Earlier this month, Sec. Blinken told @margbrennan, "it's not about regime change." pic.twitter.com/8YT9pCsfL9