NYT: Enrollment in Public Schools Has Dropped by 1.2 Million Since the Pandemic, But We're Not Sure Why 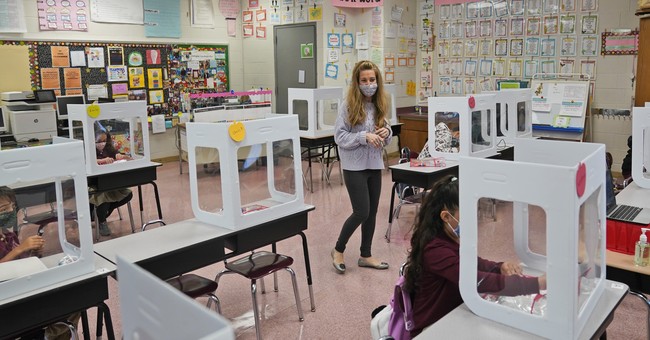 I'm being a little uncharitable with that headline -- but only a little.  This week, the New York Times published a lengthy story about a significant drop in US public schools enrollment since 2020.  The piece is filled with statistics and anecdotes that tell a very, very clear story about what's happened and why, yet its author insists that there's no agreed-upon overarching lesson to derive from the exodus:

All together, America’s public schools have lost at least 1.2 million students since 2020, according to a recently published national survey. State enrollment figures show no sign of a rebound to the previous national levels any time soon...the coronavirus crisis supercharged [a pre-existing] drop in ways that experts say will not easily be reversed. No overriding explanation has emerged yet for the widespread drop-off.

But the report itself does a pretty good job of undermining that ambiguity with the details and examples it cites:

In New York City, the nation’s largest school district has lost some 50,000 students over the past two years. In Michigan, enrollment remains more than 50,000 below prepandemic levels from big cities to the rural Upper Peninsula. In the suburbs of Orange County, Calif., where families have moved for generations to be part of the public school system, enrollment slid for the second consecutive year; statewide, more than a quarter-million public school students have dropped from California’s rolls since 2019. And since school funding is tied to enrollment, cities that have lost many students — including Denver, Albuquerque and Oakland — are now considering combining classrooms, laying off teachers or shutting down entire schools...In large urban districts, the drop-off has been particularly acute. The Los Angeles Unified School District’s noncharter schools lost some 43,000 students over the past two school years. Enrollment in the Chicago schools has dropped by about 25,000 in that time frame.

I can't quite put my finger on what these places have in common, can you?  It's just so subtle and mysterious.  I of course understand that it's not entirely as simple as, "Democrat-run places in which teachers unions and COVID safetyists dominate shut their schools down for a year-and-a-half, so a bunch of parents pulled their kids out to avoid the ongoing harm." But it's fairly close to being just that simple, as the story allows. "Experts point to two potential causes: Some parents became so fed up with remote instruction or mask mandates that they started home-schooling their children or sending them to private or parochial schools that largely remained open during the pandemic. And other families were thrown into such turmoil by pandemic-related job losses, homelessness and school closures that their children simply dropped out."  These are both obvious and COVID "mitigation"-driven ripple effects.  As important to the 'lessons learned' portion of this story are these sentences, which really solidify the whole point:

In some states where schools eschewed remote instruction — Florida, for instance — enrollment has not only rebounded, but remains robust. An analysis by the American Enterprise Institute, a right-leaning think tank, concluded last month that remote instruction was a major driver around the country, with enrollment falling most in districts most likely to have delayed their return to in-person classrooms. Private schools have also seen some gains in enrollment. Federal head counts have not yet been released, but both the National Association of Independent Schools and the National Catholic Educational Association have reported increases that total about 73,000 K-12 students during the past two years. At the same time, some families are leaving their local public schools not because they are abandoning the system altogether but because they have moved to other parts of the country that are more affordable.

Knock me over with a feather. Places that didn't shut schools down for disastrously extended periods of time have seen "robust" and "rebounded" enrollment, with a corresponding boon to private schools? Who could have seen that coming, aside from everyone. It was amazing and instructive to watch many of the so-called champions of government education argue through their words, and especially actions -- for the better part of two years -- that public education actually wasn't essential at all. A lot of parents seem to have noticed this and made related decisions on behalf of their kids' wellbeing. Others moved to parts of the country "that are more affordable," yes (lower taxes, pro-growth, pro-jobs, etc), but also parts of the country that were more likely to not have classrooms shuttered for more than a year.  The anti-choice movement is firmly committed to making sure that people who cannot afford to send their kids to other schools, and are not mobile, have their children locked into failing monopolies, no matter what.  Monopolies that, where strongest, resisted showing up for work for well over a year.  Such 'equity,' or whatever.  Meanwhile, relatedly, the Wall Street Journal reports on huge stacks of unspent "COVID relief" money earmarked for schools in the Democrats' inflation-exploding $1.9 trillion slush fund:

U.S. school districts are struggling to spend billions of dollars in federal pandemic-relief money before the funding expires. Districts have yet to spend 93% of $122 billion sunk into the K-12 education system last year as part of the $1.9 trillion American Rescue Plan, according to data compiled by the U.S. Department of Education...If local districts don’t spend or direct the funds by September 2024, the money will disappear from their budgets. Some school officials and observers are concerned by the coming deadline and the large portion of the funds that remain unspent. The short-term nature of the money has made it harder to use, school officials said...

Far too much of the money was not 'short term' enough, making it something other than urgent, emergency COVID spending. And if there's going to be so much money lying around (reminder: schools that didn't get windfalls of federal cash showered upon them managed to open safely while blue area public schools stayed closed), perhaps it should be clawed back and put to other uses that are more relevant to the pandemic. For instance:

A painful and foreboding reality is setting in for the White House as it enters a potentially dangerous stretch of the Covid fight: It may soon need to run its sprawling pandemic response on a shoestring budgethttps://t.co/dOW1qeyfue

I'll leave you with this.  Might such things also explain the movement toward private schools and homeschooling?

Elementary-high school students at @OlentangySD were allegedly given an invasive electronic survey on their pronouns, sexual orientation, and mental health. Parents were not notified and were not asked to consent. pic.twitter.com/opEPFNm6dC