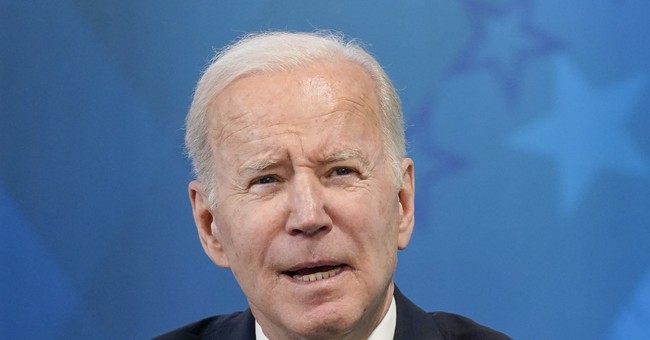 It's difficult to know quite where to start in analyzing this brand new Wall Street Journal survey of Americans, which was in the field in early March, after the State of the Union Address. The news it contains is more or less uniformly bad-to-terrible for President Biden and the Democratic Party, starting with Biden's job approval and favorability ratings. He's underwater by 15 points on the former metric (42/57), virtually unchanged from last November, when pro-Republican swings flipped the governorship in bluer Virginia – and came surprisingly close to doing the same in bluer New Jersey. His personal favorability has also eroded over the ensuing months, dropping from (-11) to (-15). Neither political party is popular, but the ruling party is less popular than the GOP (-7) versus (-15), respectively. And the American people appear poised to make some changes:

President Biden and his fellow Democrats have lost ground to Republicans on several of the issues most important to voters, a new Wall Street Journal poll finds, a troubling sign for the party seeking to extend its controlling majority of Congress for another two years. The new survey showed that 57% of voters remained unhappy with Mr. Biden’s job performance, despite favorable marks for the president’s response to the Russian invasion of Ukraine and a recent State of the Union speech, which provided him an opportunity to directly speak to millions of Americans. Just 42% said they approved of Mr. Biden’s performance in office...A majority of voters, 63%, said they disapproved of Mr. Biden’s handling of rising costs, the president’s worst rating on six policy issues surveyed in the poll. Meanwhile, 47% of voters said Republicans were better able to handle inflation, compared with 30% who preferred Democrats. Underscoring the political problem for Democrats: More voters said that Republicans had a better plan to improve the economy, 45% to 37%

What does that add up to? A significant Republican advantage on the generic ballot, a metric on which the GOP traditionally struggles: "46% of voters said they would back a Republican candidate for Congress if the election were today, compared with 41% who favored a Democrat, with Republicans gaining support among Black and Hispanic voters since the last Journal poll. That 5-point GOP edge compared with a 3-point lead in November." Dig a bit further, and there are red flags galore for Team Blue:

I can't recall ever seeing a poll like this. WSJ finds Republicans up 9 pts among Hispanics, and at 27% among black voters https://t.co/znawCKjbYW

Let's be very clear about something: If Republicans perform anywhere close to these numbers in November, the Democrats will get absolutely decimated at the polls. And if they're really up nine points among Hispanics (I'm skeptical, despite gains), the overall "generic ballot" top line would be uglier than it looks. Let's turn to individual issues, which is also a bloodbath for the incumbent party:

These are just gut-punching numbers for Democrats: Republicans with advantage on nearly every issue - except COVID.

Republicans are up by double digits on the economy (+13), crime (+20), and inflation (+17). They lead on other issues, too: Foreign policy (+7), Ukraine (+7), keeping kids in schools (+8), and even looking out for the middle class (+1). Democrats somehow retain a lead on controlling COVID, and on improving education, although that advantage has been whittled down to just five points. The vibes are just horrendous for the Democrats, as illustrated by a separate poll. People generally support Biden's decisions vis-a-vis Ukraine and Russia, yet disapprove of him on the matter broadly:

A nice and telling comparison from Navigator Research pic.twitter.com/LuAcs20xxI

Look at the numbers among independents. Biden is above water on his decisions by eight points, then crashes to 28 points underwater on the other question. He's profoundly damaged on trust and support, which is really hard to dig out of. Interestingly, in the WSJ data, Donald Trump's retrospective approval rating (48/51) is much better than Biden's, yet the two men are tied at 45 percent in a hypothetical 2024 rematch. Why? Well, this dynamic seems fairly relevant:

Interesting twist in the new WSJ poll today: 15% of U.S. voters say they don't like either Biden or Trump—but while these voters prefer Biden (+12) over Trump in a 2024 matchup, they pick Republicans (+13) over Democrats on the 2022 midterm ballot.https://t.co/ux6Z0pTXHa

I'll leave you with a former senior Obama economic advisor crushing the White House spin on inflation, which the American people also don't seem to be buying:

Well, no. These are Feb #'s and only include small Russia effect. This is Biden's inflation and he needs to own it. https://t.co/WsJjn6picV

Relatedly, what on earth is this?

REPORTER: "How long should Americans expect — how long should we be bracing for — this historic inflation and some unprecedented gas prices?"

My guess is that there were multiple questions, including one on the region, but she definitely did not answer the question posed directly to her directly after it was asked, which is where the video started.

UPDATE - It's not subtle where the American people stand on this issue: