Poll Asks Republicans and Democrats: If America Were Invaded, Would You Stay and Fight, or Flee? 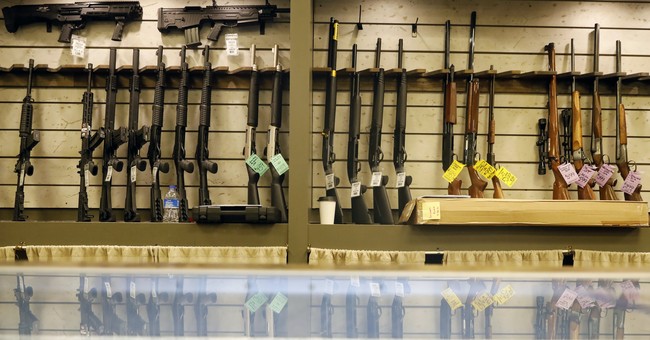 The team at Quinnipiac's pollster posed an interesting question to American respondents this week, effectively asking people to put themselves in Ukrainians' shoes. If a foreign enemy invaded the United States, what would you do? The choices were binary – stay and fight to defend the homeland, or flee the country? The breakdown of responses was, shall we say, predictable, based on political stereotypes:

Mary Katharine Ham reacted with this observation: "This poll question just deliciously confirms my priors (and we should be wary of that after a brief gleeful consumption of said data), but what's perhaps most jarring is the AGE differences. Check out the 18-34 numbers compared to Gen X & Get Off My Lawn demos." She's referring to the age breakdown. The youngest, healthiest, military-aged Americans were least likely to say they'd remain in America to fight the invaders:

Majorities in every other age bracket would stay and fight, a slim plurality of the youngest Americans say they'd leave. A few of the other demographics are also interesting, and we'll touch on some in a moment, but the outcome getting the most attention is the partisan split. Self-identified Republicans overwhelmingly say they'd stick around for the battle (68/25), with a solid majority of independents saying the same (57/36). A clear majority of Democrats told the Q-poll they'd opt to flee America. Could part of that be attributable to the gender gap that has been a staple of our modern political environment? Women are, expectedly, less likely to want or to expected to be combatants in a war – and if you want to accuse me of sexism for saying so, just look at the poll results. Seven in ten US men say they'd stay; a majority of women say the opposite. Because men skew red and women break blue, that's one explanatory factor at play. This result is also noteworthy, via Allahpundit:

One other fascinating detail not visible in the table is the sharp split between blacks and Latinos on the question. Just 38 percent of African-Americans say they’d fight versus 59 percent who’d leave. But among Hispanics, 61 percent would fight compared to 33 percent who’d leave. I assume that’s a cultural legacy of America’s historical persecution of blacks, generating a degree of national disaffection that persists to this day. Without that same history of persecution, Hispanics’ numbers are more in line with whites’ and Republicans’. That’s another ominous data point for Democrats who are tracking Latinos’ rightward political shift.

Whites' overall responses (57/35) are nearly identical to Hispanics' (61/33), with the latter group being slightly more likely to assert they'd take up arms to defend American turf from foreign invaders. As AP notes, that also aligns pretty closely with Republicans' outlook. The rightward drift of Hispanics is real, as we discussed again just yesterday. On the Ukraine crisis, Americans are extremely hawkish toward Russia across party lines. Nearly half of Democrats say President Biden hasn't been tough enough on Putin so far (this poll was taken before Biden finally caved to bipartisan pressure on oil imports), while roughly eight in ten Americans (79/14) support a US military response against Russia should the Kremlin attack a NATO ally. That number includes 88 percent of Democrats.

I happen to agree with the vast majority of Americans, given our clear and solemn treaty obligations. I'd be interested to listen to interviews, however, with the many, many Democrats who appear to support an American military attack against Russia under such circumstances, but who would leave the United States if, say, the Chinese invaded us. I'll leave you with a reminder that what people tell a pollster about a hypothetical scenario may not actually reflect their real-life choices when confronted with decisions. That cuts in both directions, of course, though it's striking how many people volunteered that they'd leave America rather than defend it. And then there's this, on the gender gap mentioned above:

I love it that The NY Times decided to get a quote from a psychologist in Kyiv and got this one: https://t.co/O5u8CMwr07 pic.twitter.com/j39557JVIN

UPDATE - Because it evidently needs to be said, Charles Cooke writes that of course Americans should take up arms and defend their soil in the event of an invasion: