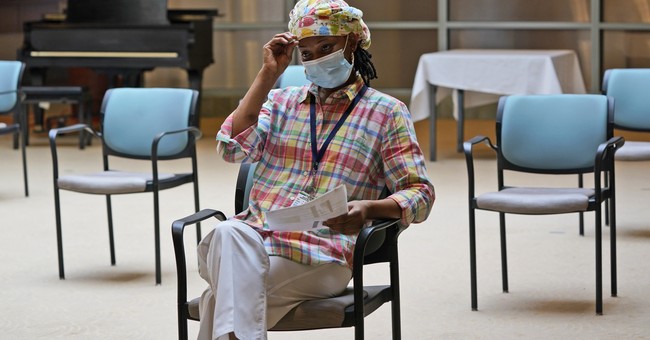 In my first piece on the Omicron variant last week, I cautioned against overreaction or panic while laying out three key questions: (1) Is the new variant more contagious than previous ones? (2) Is it more virulent, causing more severe outcomes? (3) Do our vaccines offer protection against hospitalization or death against Omicron? There were some initial indications that at least on the latter two questions, the answers were looking favorable. Where do things stand now? Most experts continue to say it's too early to tell, as information continues to be gathered and reviewed. But it is starting to look like Omicron could indeed be highly transmissible. In a broadly pessimistic analysis, Allahpundit surveys the emerging data and concludes that the transmissibility issue is looking potentially concerning, as Omicron might be "outcompeting" Delta:

Data keeps trickling in pointing to it being extremely transmissible, whether because it’s more contagious than Delta or more capable than Delta of infecting people with prior immunity (or some combination of both)...Virologist Trevor Bedford has been looking at the data in South Africa, trying to estimate the reproduction number for Omicron. He’s not prone to sky-is-falling hyperbole about COVID but he’s nervous about what he’s seeing. His best guess is that the variant has a reproduction number of 3 or 3.5, which would mean it’s infecting twice as many people as Delta and is comparable to how quickly COVID was spreading in the U.S. at the start of the pandemic before any mitigation measures were in place. In other words, after nearly two years of South Africa and the rest of the world acquiring a large degree of immunity against the coronavirus, Omicron somehow seems to be running as freely as the initial Wuhan strain was...It’s possible that in western countries where Delta is prevalent and vaccination rates are high, like the UK, Omicron will get crowded out by Delta and won’t spread much. But what scientists are seeing in the UK numbers suggests that it is spreading rapidly there

For various links, charts, and figures, click through to his piece at HotAir. But, again, the latter two questions listed are extremely crucial, and we continue to see some good signs on the virulence front:

Norway has the biggest outbreak of Omicron outside South Africa. All 64 are fully vaccinated and none of the cases have needed hospital care. They have mild symptoms like headache, cough, sore throat and flulike symptoms. Several now say they feel better. https://t.co/5ofbbzPM05

The outbreak occurred at an office holiday party in Norway, with nearly half of attendees testing positive (a number of them had recently returned from South Africa). Every person in attendance was vaccinated and had tested negative the day prior, per the Journal report. That would seem like bad news, in some respects. A super-spreader impacting exclusively vaccinated people, all of whom had recently 'passed' rapid tests? But the hopeful and critical context is that these cases have been mild:

The cluster is remarkable because it took place in a bubble of immunized people, in a country where more than 80% of adults are fully vaccinated. Norway has opened up booster shots for all adults as winter sets in, a time when people begin mixing more indoors, thus providing the virus more opportunities to spread. But it also provides signs of hope, however anecdotal and thin, that Omicron cases can turn out to be mild among healthy, vaccinated adults. So far, none of the infected employees are seriously ill, said Mr. Karlsen. “People have different kinds of symptoms but none are severe,” he said. “No one has any serious issues.” Still, the rapid spread, he added, had taken him aback: “That’s what’s really curious…All of a sudden, 60 people. It’s just insane.” ... The country is averaging six deaths daily.

This hasn't stopped the Norwegian government from re-imposing numerous restrictions, from new mask requirements to limiting social gatherings. But zero severe cases from this concentrated outbreak is uplifting news. It somewhat reminds me of the Provincetown, MA COVID event over the summer, in which hundreds of overwhelmingly-vaccinated partygoers tested positive for the virus: "According to the report, of the 469 people included in the study who were in the area between July 3 and July 17 and tested positive for the coronavirus, 74% were fully vaccinated. A total of five people were hospitalized, four of them vaccinated, and there were no deaths. 90% of the subset of people who had sequencing performed on their samples were infected with the delta variant." Well over 400 cases, and just five hospitalizations, and no deaths. In the Norway example (apparently featuring Delta and Omicron), it's at least 64 cases, and thus far no hospitalizations or deaths.

That's encouraging, although the flip side was articulated by a professor quoted in the article: "If [those infected] were of working age and young enough to be partying into the night, they were already probably at a low risk." What happens when Omicron hits unvaccinated people, especially older ones or people with preexisting conditions? That remains unclear, although another glimmer of hope is that South Africa has dramatically lower vaccination rates than the United States and Europe, yet hospitalizations have not spun out of control in that country, which has been an early epicenter of the variant:

"South Africa’s surge in Covid-19 cases following the emergence of the omicron variant hasn’t overwhelmed hospitals so far, prompting some cautious optimism that the new strain may cause mostly mild illness." https://t.co/w8TJhlu5n4

"While the early link between infections and hospitalizations may look encouraging, there also tends to be a time lag between the two occurrences," the Bloomberg report notes, which is true. We are still in "wait and see" mode, but it does seem clear that Omicron has been floating around South Africa for at least weeks now. And if it's as contagious and fast-moving as feared, one might think that the lagging indicator of hospitalizations would have arrived by now. And yet: "In another encouraging sign, the Steve Biko and Tshwane District Hospital Complex in Pretoria, South Africa, said that most patients in the Covid wards didn’t require oxygen. That marks a departure from previous waves." More hopeful signs:

NEW: Researchers at a major hospital in South Africa say patients infected with Omicron are much less sick than those treated before, and that other hospitals are seeing the same.
But it’s still early to say definitively that the variant is less severe.https://t.co/lEo0GUhwf2

The jury is still out on all three big questions, but Omicron appears to be quite transmissible, while initial returns on virulence continue to be a source of relief. Meanwhile, what to make of this story out of Israel?

Elad Maor initially feared that he might have exposed hundreds of people to the virus when he became the first Israeli to test positive for the new Omicron variant on Saturday morning. In the three days before his positive results, Dr. Maor, a cardiologist, had attended a large staff meeting at his hospital east of Tel Aviv. He had inserted stents into the arteries of 10 patients. And he had driven to a cardiology conference north of Tel Aviv, sharing the 90-minute car journey with a 70-year-old colleague, and lunched there with five others in a crowded canteen. Dr. Maor, 45, had attended a piano recital with dozens in the audience, where his 13-year-old played a short piece by Stephen Heller, a Hungarian composer. And finally, last Friday night, Dr. Maor had eaten sea bass at the home of his in-laws, together with his wife and nine other family members. But of these many people, most of whom had received three shots of the Pfizer-BioNTech vaccine, only his 70-year-old colleague has so far tested positive for the Omicron variant in the five days since.

This Omicron-infected doctor interacted with many people, including patients, before testing positive. But he didn't infect almost any of them, with one exception so far. Good news? Maybe, but Israel is one of the most vaccinated places, boosters included, in the world. This anecdote could prove that even a transmissible strain is unlikely to spread like wildfire if the exposed population is fully-vaxxed and boosted. But how many populations like that exist in the world? And this isn't great:

To Dr. Maor, who was still in isolation at home on Wednesday night, it was still concerning that he had been hit so hard by the virus, despite being fully vaccinated himself, and despite being a fit nonsmoker without any chronic medical conditions. The cardiologist spent Saturday and Sunday in bed with a fever, sore throat and aching muscles — and only began to feel considerably better on Wednesday afternoon. “Despite everything, despite the vaccines and the booster, I was in bed for 48 hours,” Dr. Maor said in a phone interview. “If I didn’t have the vaccine, I probably would have ended up in the hospital.”

A young, healthy, triple-vaxxed doctor still had a miserable experience with Omicron, though not miserable enough to require medical care. He's now recovered. I can't decide if this case study is encouraging or discouraging on balance, but it's just one anecdote. Wider data is much more important, and for now, the virulence data is looking pretty good. I'll leave you with another instance of reports using the wonderful word "mild" in describing cases:

“Higher hospital admissions among children during a fourth wave of COVID-19 infections in South Africa that has been driven by the Omicron coronavirus variant should not prompt panic as infections have been mild, a health official said on Saturday.”https://t.co/aAds2v39JH

And there's this, via a Johns Hopkins infectious disease epidemiologist:

Just to confirm that this is what we're panicked about.

I know there's a lag between infection and death.

But Omicron has been circulating in South Africa for over a month, and we're only seeing 20 COVID deaths/day nationwide.

In a population of ~60 million. pic.twitter.com/SXA4voWp77